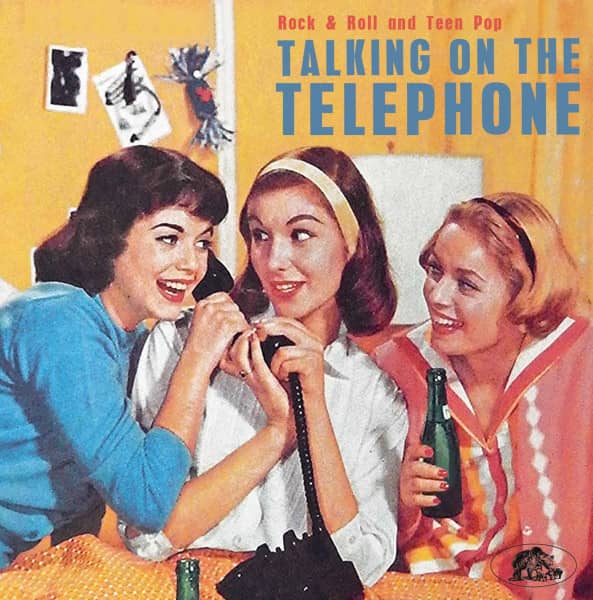 Various: Talking On The Telephone - Rock'n'Roll And Teen Pop (CD)

1-CD with 36-page booklet, 28 tracks.
• Contains 28 telephone-themed early rock & roll and teen pop records including rare and previously unissued tracks.
• Appeals to historians of popular culture as well as collectors of 50s music looking for something a little bit different.
• Contains the barely issued ‘answer record’ to the Big Bopper’s mega-hit Chantilly Lace, as well as the fascinating backstory behind how this record was withdrawn following the Bopper’s untimely death.
• Includes rare photos and detailed track notes by music historians Hank Davis and Roy Forbes.
Telephones have been part of our lives for over a hundred years. Like automobiles, which appeared at roughly the same time, telephones had a massive impact on how we live from the very start. Not surprisingly, people sang about telephones almost as quickly as the devices appeared. Previous ‘Talkin’ on the Telephone’ collections have focused on hillbilly and R&B music (RWA 12524 and 12557). This long-awaited collection brings together Telephone Songs from the early days of rock & roll and teen pop music. Teenagers were becoming a force in the music business during the 1950s and rock & roll gave them a chance to sing about their newfound freedom. Talking on the telephone offered teenagers independence from parental oversight, and the birth of rock and roll gave them a chance to sing about it.
This collection brings together some extremely rare and long-forgotten songs about what telephones meant to teenagers. Some of these artists, like Paul Anka, Brenda Lee and Chuck Berry, remain well-known today, nearly 70 years after they made these records. Others, like Lew Williams, Johnny Fallin and Bill Woods, have faded into near-total obscurity.

Outstanding selection of rock & roll songs with a telephone theme.

3rd Cd in this series & they are all great. You won't be disappointed.