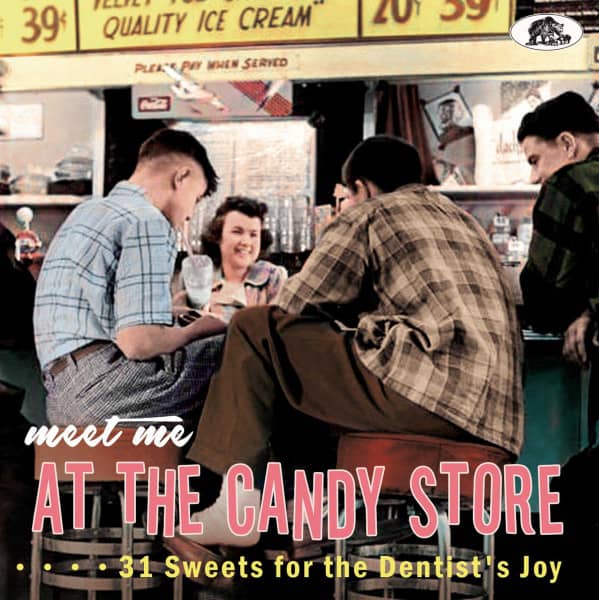 Various Artists: Meet Me At The Candy Store - 31 Sweets for the Dentist's Joy (CD)

1-CD with 16-page booklet, 31 tracks. Total playing time approx. 76 min.
Candy Store
Who still remembers the famous scene in a Pippi Longstocking movie, when the children pressed their noses flat against the window of the candy store and Pippi subsequently bought the store empty and distributed candy canes, sweets and chocolate. We also remember it from our own childhood and youth, a candy store has always been a meeting place, whether in Europe or the United States. Like all large and small topics of everyday life, this subject is also well documented musically, and we have picked out the musical raisins and summarized them in this collection!
Sweets For My Sweet
Sweets For My Sweet is probably the best-known song in this compilation, here in the original version by the Drifters (most listeners will be familiar with the Searchers' version). In addition to a host of little-known artists who nevertheless sound like hit-makers, we have top names of music history like The Ames Brothers with a swing boogie, an early recording by Buddy Greco, a mambo by Frank Virtue, a rare LP track by the Crew Cuts and last but not least the rare stereo version of the McGuire Sisters' Sugartime Twist! Appearing here for the first time on CD are the title track Meet Me At The Candy Store by The Chesterfields and rare numbers by The Val-Chords, Johnny Redd, Judy Valentine, Ricky & The Vacels, Ronnie Diamond and many more!
Along with plenty of rock 'n' roll smashes, we deliver country sounds from Dick Curless as The Trail Riders, Canadian singer Kidd Baker, Charlie Walker and Eddie Miller. Plus some Latin/Mambo from Chuck Cabot and Tito Rodriguez and vintage pop from Nat Russell from Denmark, Alan Copeland, Larry Dean with the Lennon Sisters, Lola Ameche etc. The compilation closes with the absolute classic that everyone knows from Sesame Street, here in the original version! The CD comes with a 16-page booklet in color with background information on each song, compiled and written by Marc Mittelacher, as well as many partly rare photos and illustrations!

Article properties: Various Artists: Meet Me At The Candy Store - 31 Sweets for the Dentist's Joy (CD)

Review 1
Read, write and discuss reviews... more
Close menu
Customer evaluation for "Meet Me At The Candy Store - 31 Sweets for the Dentist's Joy (CD)"
From: Peter On: 1 Jun 2022

Nice compilation! I pretty much enjoy your theme CDs!