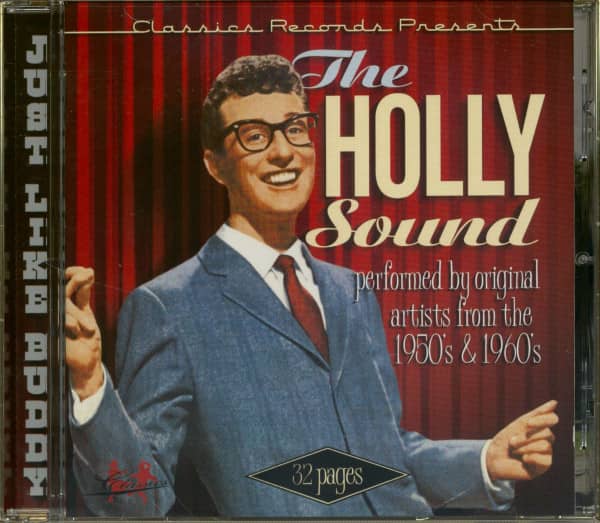 THE HOLLY SOUND When one reflects on the rock 'n' roll pioneers whose influence has lasted since the rock 'n' roll invasion took over the music culture, it is somewhat surprising to con-sider that relatively few of them had a long and consistent run of chart hits. Gene Vincent, for example only had two significant records and the great Jerry Lee Lewis only had slightly more. There were of course exceptions to that rule such as Elvis Presley and Fats Domino.

One musician whose influence is far greater than the quantity of chart hits is Buddy Holly. Here in Europe, he is considered in near reverential terms. His recordings still sell to this very day and he had chart placings in Great Britain long after his death. He certainly is held in higher regard over here than in his home country of America. However, his influence does not end there. Even today, new recordings based on his unique style are still being made. Back in the late fifties and early sixties, there were literally hundreds of recordings, either straightforward covers or new songs based on the «Holly Sound», appearing.

For example, take 'Shelia' by Tommy Roe. First versions by Roe at this song, great as they were, flopped miserably until he went into the studio with Felton Jarvis and added a 'Peggy Sue' backing to the song. The outcome was a top ten hit all around the world and lead to a career that is still going strong to this very day. For this compilation, a follow up to Echoes Of Buddy Holly (CLCD 710), Classics Records has trawled through record bins worldwide and have come up with this sizzling thirty track selection.

Some have outright Holly connections and some are attempts to recreate the sound of Holly. What is consistent is the sheer quality of music on offer. Sit back or put on those boppin' shoes and enjoy.
Tony Wilkinson