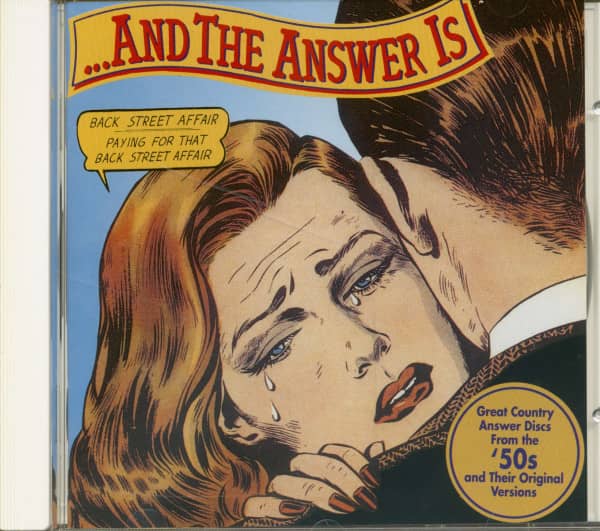 Various - And The Answer Is: Great Country Answer Discs From The '50s And Their Original Versions Vol.1 (CD)

Great country hits of the Sixties and their answer songs: Hank Williams' Jambalaya, followed by Goldie Hill and I'm Yvonne (From The Bayou); Bobby Helms' Fraulein
followed by Kitty Wells' I'll Always Be Your Fraulein; Hank Thompsons Yesterday's Girl  followed by Goldie Hills I'm Yesterday's Girl; Eddy Arnolds I Really Don't Want To Know
followed by Betty Codys I Really Want You To Know. A total of 14 great hits plus 14 answer songs!
These days, country music suffers from having friends in high places, specifically academia. For years the blues has suffered from the same fate: academic analysis and dissection to the point that poor old Howlin' Wolf probably wouldn't recognize himself. Now it's country music's turn. Academics look for levels of social significance in country music that were never there in the first place. To do this they have to ignore the dumb, fun, carny aspect of country music, like Porter Wagoner's suits, outhouse jokes...and answer discs.

The answer disc is an extinct species these days, but there was a golden age of answer discs in the fifties and sixties, and here are some of the best, reveling in their tastelessness and lack of redeeming social value. Academics, don't be fooled into thinking that Kitty Wells' It Wasn't God Who Made Honky Tonk Angels is a statement of neo-feminist values. Not only was it written by a man, but it was written by a man sniffing out an easy buck. J.D. Miller later cut wonderful swamp blues records as well as the ultimate politically incorrect records (Move Them Niggers North, Lookin' For A Handout etc.) for his own Rebel label.

He realized that the melody of Wild Side Of Life was in the public domain, which meant that he wouldn't have to surrender half the copyright to the writers of the original, as most writers of answer songs have to do. The melody had in fact come from England several hundred years earlier, although it's doubtful that Miller knew this. Inspiration struck him on Rte. 90 in Louisiana, and he pulled his car over and scribbled down his sequel. The then-unknown Kitty Wells cut it not because she empathized with the lyrics, but because she needed the session fee. The capriciousness of the music business is such that she still has to sing it twice a night.

Webb Pierce cut songs that lent themselves to answer discs because he loved songs that ruffled feathers, just as he later loved upsetting one of Nashville's tonier neighborhoods by inviting the tour buses in to look at his house, his guitar-shaped pool, and his silver dollar encrusted Pontiac. True to form, Webb would also try to sell the tourists some records while they were there from a little rack he had mounted by the pool. He was a man who knew that any publicity is good publicity.

On Back Street Affair and There Stands The Glass he forthrightly addressed subjects that had usually been tiptoed around. The answer-discs, in comparison, take the high moral ground and suffer as a result.

Goldie Hill made something of a career out of answer-discs. The sister of songwriter and producer Tommy Hill and later the wife of Carl Smith, Goldie first broke through with I Let The Stars Get In My Eyes, and, like most country singers in that day and age, once she'd found a horse that looked like a sure thing she rode it until it could barely make it out of the gate. Don't Let The Stars Get ...

Article properties: Various - And The Answer Is: Great Country Answer Discs From The '50s And Their Original Versions Vol.1 (CD)

And The Answer Is

A compilation of songs, often hits from the genres country, rock & roll and pop of the fifties and sixties - and the corresponding'answer songs', which have been recorded by well-known and often less well-known artists!

Review 1
Read, write and discuss reviews... more
Close menu
Customer evaluation for "Great Country Answer Discs From The '50s And Their Original Versions Vol.1 (CD)"
From: Dieter B. On: 30 May 2017 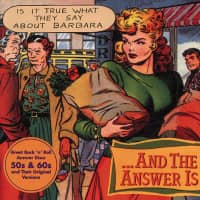 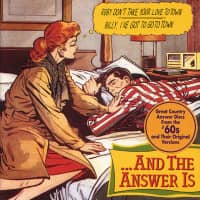 Tracklist
Various - And The Answer Is - Great Country Answer Discs From The '50s And Their Original Versions Vol.1 (CD) CD 1
01 Wild Side Of Life
02 It Wasn't God Who Made Honky Tonk Angels
03 Back Street Affair
04 Paying For That Back Street Affair
05 There Stands The Glass
06 Please Throw Away The Glass
07 Yesterday's Girl
08 I'm Yesterday's Girl
09 I Forgot More Than You'll Ever Know
10 I Found Out More Than You Ever Knew About Him
11 I Really Don't Want To Know
12 I Really Want You To Know
13 Don't Let The Stars Get In Your Eyes
14 I Let The Stars Get In My Eyes
15 Long Black Veil
16 My Long Black Veil
17 I Fall To Pieces
18 I'll Pick Up The Pieces
19 Mexican Joe
20 The Marriage Of Mexican Joe
21 Jambalaya
22 I'm Yvonne (From The Bayou)
23 A Dear John Letter
24 Forgive Me, John
25 Geisha Girl
26 Lost To A Geisha Girl
27 Fraulein
28 I'll Always Be Your Fraulein