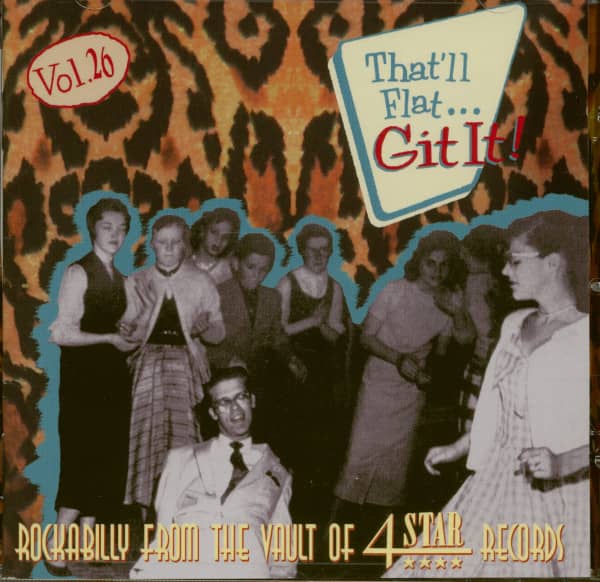 Rockabilly from the vaults of Four Star Records!
There is no post-War record business saga as convoluted as that of 4 Star Records. The most important west coast-based independent label of the 1940s, it could have been an industry powerhouse if its longtime owner, Bill McCall, treated his songwriters and artists as anything but indentured serfs. The label was launched by Richard A. 'Dick' Nelson in August 1945 as a subsidiary of his Gilt-Edge Records, itself launched in 1944. 'Four Star' was an unlikely name because it denoted something less than five stars, which usually meant top-of-the-line. Nelson had scored a huge hit with Cecil Gant's R&B hit I Wonder (see Bear Family's Blowin' The Fuse 1945 for the story), but he'd run into problems by the time he recruited William A. 'Bill' McCall as a major investor or purchaser. McCall reportedly stumped up $5000. Margaret Jones' biography of Patsy Cline described McCall as a short, dapper Texan with squinty eyes and a penchant for headwear like berets and Stetsons. He had been a miner in Nevada, supplying fluorspar and other minerals to record manufacturers. At some point, he started a milling plant in Los Angeles, and, with shellac and other ingredients used in record manufacture in short supply, he advertised for records that he could regrind. He supplied his compound (containing as little shellac as possible) to Gilt Edge and other plants before buying a stake in Gilt-Edge/4 Star.

When McCall bought Gilt-Edge/4 Star in 1946, the label was run on a day-to-day basis by Cliff McDonald and Don Pierce, and focused on Hispanic releases. “When Bill came in, we had about forty or fifty creditors and no money to pay them,” Pierce told John Broven. “They were calling me on the phone, and I was about to have a nervous breakdown trying to get them paid or stalled off. Bill took that off me and let me go off and handle sales and production.” McCall bullied his creditors into accepting pennies on the dollar, even though 4 Star was an ongoing operation. The business was based at 500 N. Western Ave. in Los Angeles, then on Larchmont Avenue in Pasadena, and finally on 305 South Fair Oaks Avenue in Pasadena. A mini-feature on 4 Star in Billboard (1946) said, “Should Four Star record sales drop, which they show no sign of doing, the company can always turn to its own milling plant for rejuvenated profit.  Operating its own factory, the diskery makes stampers for many other labels than its own, and from these combined activities entered a gross sales mark for '45 of $1,500,000.” McCall and Nelson were absent from the list of officers of the company cited in the feature. Those listed were G. C. McDonald, president; H. J. Scribner, vice-president; Jerry Rolston, secretary; and Don Pierce, treasurer. By this point, the company seemed to be concentrating on its new pop and jazz signings, none of whom amounted to anything.

The first major hillbilly star on 4 Star was T. Texas Tyler. Initially, he covered fast-breaking records on other labels in the hope of selling to jukebox operators who couldn't get the originals. In Tyler, though, 4 Star had a bona fide star, and before long the label was predominantly country. Cliff McDonald left 4 Star to manage Tyler, while Pierce and McCall began broadening their horizons and forged relationships with Pappy Daily in Houston and the Adelmans in Washington. McCall also increased his presence in the R&B market when he took over Bob Geddins' Big Town label. Daily distributed 4 Star and was recording artists like Webb Pierce and Hank Locklin in Houston on behalf of 4 Star. “He had been so fantastic at not only finding talent, but recording them,” said Pierce. “He'd send in the tapes, and order a thousand copies of the record, then go out and promote and sell the record. How often do you find a distributor that will do that?” Through the Adelmans, McCall acquired Jimmy Dean, who scored a top 5 country with Bummin' Around, and Patsy Cline.
During these years, Pierce and McCall came to recognize the value of music publishing and assiduously acquired copyrights on behalf of 4 Star. McCall briefly relaunched Gilt-Edge in 1950 so that he had an alternative set of distributors in place. Around the same time, McCall and Pierce began custom manufacturing. Artists would send in their tapes, 4 Star would manufacture a limited run of records, keep the publishing, and watch to see if the record did anything. In this way, they acquired the record that would be the turning point in the company's history.

Slim Willet's Don't Let The Stars Get In Your Eyes was manufactured by 4 Star's custom pressing division. Willet promoted his record in Texas, and it was covered by Skeets McDonald, Johnnie & Jack, Ray Price, and then Perry Como. When Como's record became the top-selling pop single of 1953, McCall was sold on music publishing as a business, and began extricating himself from the record business. Meanwhile, Pierce was sold on the idea of getting out of 4 Star. “I left the company, turned the car key over to him and went and got myself a lawyer and prepared to sue him for breach of agreement, and I spent that summer in Los Angeles not knowing what I was going to do,” Pierce told me. Later that year, he joined Pappy Daily, who had just launched Starday Records, although it took him years to retrieve the equity he'd built up in 4 Star.

Bill McCall's new business model was to 'lease' artists to Decca, beginning in 1952 with Hank Locklin. Many others, including then-unknown Patsy Cline, were shunted onto Decca. The written understanding was that Decca would pay for the sessions but the artist would record only 4 Star songs, and the recordings would revert to 4 Star at some point. The unwritten understanding was that McCall would give Decca's Paul Cohen a kickback on all revenue from Decca. And so from around 1953, 4 Star was primarily a label for those artists that Decca didn't want. Meanwhile, McCall built his publishing catalog, and it included Just Out Of Reach, Send Me The Pillow You Dream On, Walkin' After Midnight, Am I That Easy To Forget, Lonely Street, and Release Me.

But McCall wasn't satisfied with owning the music publishing. Whenever possible he acquired a share of the composer credits as well, usually as W.S. Stevenson (a name compounded from William Shakespeare and Robert Louis Stevenson) or Ethel Bassey (his wife). In this way, McCall acquired a chunk of Release Me and several other hugely valuable copyrights (songwriter Robert Yount hung onto his share of Release Me from its inception in 1949 until 1958; at that point, he foolishly sold hisshare to McCall, and the extent of that mistake became clear nine years later when Englebert Humperdinck recorded it). As releases on 4 Star slowly wound down, McCall made a deal with King to release some vintage masters by Webb Pierce, T. Texas Tyler, the Maddox Brothers and Rose, and others as well as distribute the trickle of new single recordings still being released.  Then, in 1960, Joe Johnson of Challenge Records in conjunction with Gene Autry, bought 4 Star music publishing. The following year, Johnson bought the record catalog. McCall told 4 Star artist Wayland Chandler that his only involvement in the business after that was to show up twice a year to pick up his 'W. S. Stevenson' cheques.

A minority stockholder in Challenge Records, Bernie Solomon, left to take an interest in a New York-based classical label, Everest Records (Solomon, incidentally, was related to the Solomons who owned Vanguard Records). Evidently, Solomon struck a deal with Johnson because Patsy Cline's 4 Star recordings began appearing on Everest in 1962. Then, in 1964, 4 Star masters appeared on Pickwick Records and its Hilltop subsidiary. In 1974, Johnson reactivated the 4 Star label in Nashville in conjunction with MCA Records. He built a five-story building in the Music Row area with a sixth story penthouse apartment for himself. He envisaged it as a Nashville Brill Building, but for all the hoopla, he only managed to score a few minor hits with George Morgan and Jerry Wallace.

In 1975, McCall (by this point in Hawaii) sued Challenge and 4 Star Music for 'W. S. Stevenson' composer royalties and, in 1977, won a judgment of $417,000. The problem was that, in September 1976, 4 Star had filed for bankruptcy. It was bought by a company owned by Bill Beasley, the former owner of Tennessee and Republic Records, but the sale was ruled invalid, and 4 Star limped on in receivership. Bill McCall died in 1978, and in 1980 a Tennessee judge ordered that the receiver pay his widow $200,000 to satisfy the judgment.

The most valuable 4 Star masters, including Patsy Cline, were sold with the Challenge masters to Tree Music, and Tree was subsequently sold to Sony, although Pickwick still claims the masters. Four Star's music publishing was acquired in March 1982 for $1,750,000 by Acuff-Rose, and Acuff-Rose is now owned by…you guessed it…Sony. The legal saga continued with Ethel Bassey McCall and James McCall still suing Joe Johnson as late as 1996 and '97. Meanwhile, songwriter Robert Yount sued James McCall and his two sisters for royalties on Release Me. The McCall heirs were also sued over a share of Walkin' After Midnight that their father had somehow acquired.

Bill McCall is remembered without much warmth by those who lost a share of their copyrights to him. He wasn't a music man, as evidenced in this 1951 song, Arkie's Talking Blues:
"So I went to 4 Star with a smile on my face
I had a little tune called 'Hot Rot Race'
Bill McCall, he said it was no good
I'd be better off a-cuttin' hard wood.
It hurt my feelings, he slammed the door.
I went up the street talking to myself.
But we recorded it, though."

Here are thirty 4 Star recordings. Bill McCall didn't make much money with most of them, which would have disappointed him, but they still jump out of the jukebox.