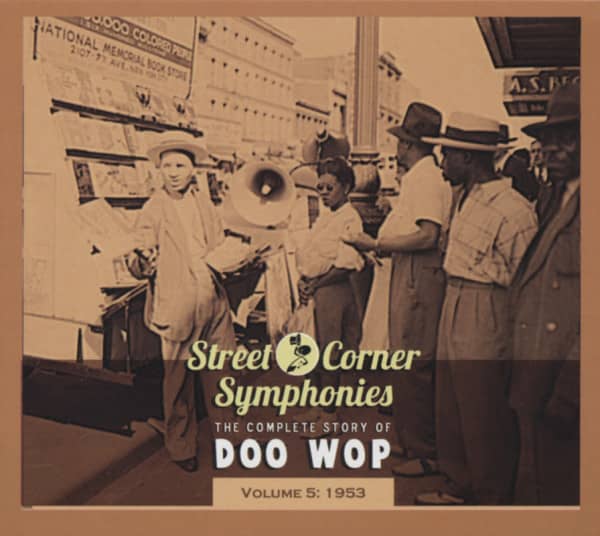 The R&B vocal group explosion was in full swing by 1953. Incendiary gospel-fueled tenor Clyde McPhatter had broken away from Billy Ward's Dominoes to do his own thing as front man for The Drifters, who would reign as the country's top R&B vocal aggregation well into the '60s soul era, even if Clyde had left them long before to pursue a solo career. The Clovers, Dominoes, Orioles, Swallows, and Robins had been joined on the circuit by a slew of promising newcomers, many of whom would rapidly ascend to peer status. The Moonglows, Flamingos, Platters, Harptones, Spaniels, and Spiders all made their debuts in 1953, several scoring hits right off the bat and every one of them launching careers built to last.

Rock and roll loomed on the horizon and R&B vocal groups played a mammoth role in its fiery ignition, even if conventional history books sometimes overlook that fact. The Crows' smash Gee racked up considerable pop crossover action thanks to its carefree up-tempo feel, catchy melody, and innocuous lyrics, though the song took its sweet time climbing the charts, not really making a national impact until the following year. Notable vocal groups were popping up in Chicago, Cleveland, Detroit, Nashville (behind prison bars, no less), and New Orleans, underscoring that the movement wasn't primarily limited to the coasts anymore. Yet the Northeast still harbored more groups than anywhere else. Harlem remained a teeming hotbed, as did Philly, Baltimore, and Washington D.C.

Apart from The Four Tunes, who staged an impressive comeback after leaving the security of a major label for feisty indie Jubilee Records and scoring their biggest seller in eons with Marie, the old guard had largely been forgotten by African-American record buyers. Young groups plucked right off the street corners of urban America were making a lot of chart noise and scoring a lot of hits. Harmonies didn't have to be impeccably polished any longer; feeling mattered more. Roaring sax solos and socking backbeats were more prevalent as tempos ratcheted upwards. Of course, a tender, intimate love ballad was always welcome.

In most cases, vocal group platters were released on independent R&B labels rather than the majors that had once marketed The Ink Spots and Mills Brothers so vigorously. The industry was changing fast, and the majors were scrambling to keep up. Little did they know what lurked just around the next bend.

With a minimum of 30 tracks per disc there's a wealth of obscurities to investigate that are worth singing about.
Uncut 8/12 Terry Staunton