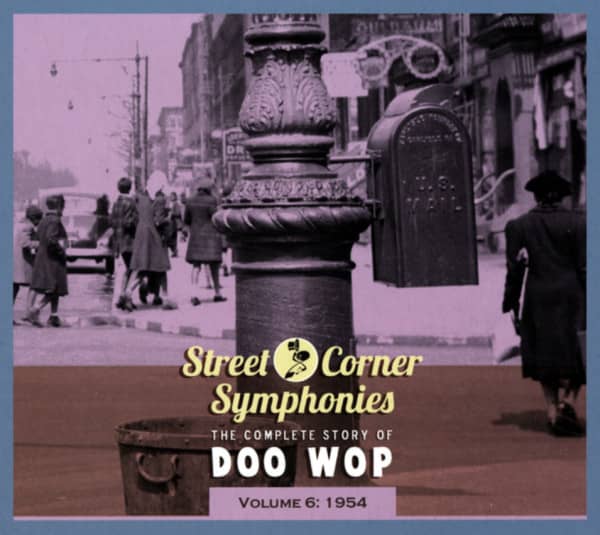 Rock 'n' roll was busting out all over in 1954 and R&B vocal groups were in its vanguard, even if the history books don't always report it that way. The Chords' Sh-Boom, The Midnighters' Work With Me Annie (sleazy lyrics and all), The Charms' Hearts Of Stone, and Shirley Gunter and The Queens' Oop Shoop were rocking jukeboxes from coast to coast.

Of course, intimate love ballads remained an integral part of the vocal group scene too. 1954 brought a bumper crop, led by The Moonglows' Sincerely, The Penguins' Earth Angel (Will You Be Mine), and The Spaniels' Goodnite Sweetheart, Goodnite. These slow, sensuous themes were aimed solely at the teenage market and connected bigtime. No longer was it necessary for groups to display ultra-polished harmonies; teens looked for lyrics they could identify with and a beat they could dance to. The major labels responded with an unprecedented number of white pop covers, robbing the original artists of much of their crossover potential (Mercury and Dot were especially active in the cover sweepstakes). But R&B fans (and hip white teenagers) knew that the superior originals were worth seeking out, even if it required a trip to the record shop on the other side of town.

More new groups than ever filled the airwaves, and more new indie labels were being formed to meet the growing demand for product. Los Angeles was hopping as budding entrepreneurs leaped into the fray. It was still tough to propel a West Coast hit over the Rocky Mountains, though Earth Angel on bandleader Dootsie Williams' self-named DooTone Records certainly succeeded. Fortune Records began to investigate Detroit's vocal group scene with The Diablos' haunting The Wind, while New Orleans spawned The Spiders and The Hawks.

The East Coast remained the sound's primary stronghold. Clyde McPhatter's Drifters set the pace along with The Clovers, Harp-Tones, Five Keys, Solitaires, Cadillacs, and many more. Philly hosted its share, notably newcomers Lee Andrews and The Hearts and The Capris. As great a role as Elvis, Fats Domino, Chuck Berry, and Little Richard played in rock and roll's explosion, the impact of the groups populating this compilation should never be discounted. Their sweet harmonies counterpointed the wild gyrations of Presley and Berry, making it just a tad easier for suspicious parents to accept rock 'n' roll into their formerly sedate homes.