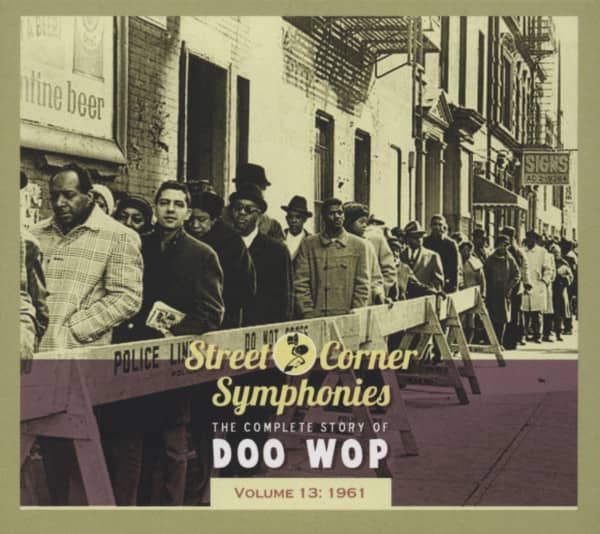 The vocal group scene was a veritable dichotomy in 1961.

Sophisticated, violin-enriched uptown soul was revolutionizing the genre, thanks to The Drifters - proven hitmakers that ignited the entire movement with their Latin-tempoed, crossover-heavy output - and fresh disciples such as The Jarmels, Velvets, Corsairs, and Crystals. This was the wave of the future, a precursor to an avalanche of soul music lurking around the corner. On the other hand, the classic doo-wop approach hadn't faded away. In fact, it appeared as popular as ever.

New groups kept emerging, imaginatively expanding boundaries. Fred Johnson's nonsensical, floor-rumbling bass rants drove The Marcels' chart-topping Blue Moon, the group's innovative approach reinvigorating an old pop classic. Similarly, The Cleftones relaunched their career by reinventing Heart And Soul, another revered chestnut. The stripped-down street corner sound that long held sway still ruled, judging from Gene Chandler's Duke Of Earl (his Dukays went uncredited) and heart-tugging ballads such as The Pips' Every Beat Of My Heart, The Dreamlovers' When We Get Married, The Jive Five's My True Story, The Spinners' That's What Girls Are Made For, The Chantels' Look In My Eyes, The Larks' It's Unbelievable, and Shep and The Limelites' Daddy's Home.

Thanks in large part to the immense popularity of the Twist (both the dance and the song), a torrent of pummeling dance workouts - The Vibrations' The Watusi, The Flares' Foot Stomping - Part 1, The Rollers' The Continental Walk, The Dovells' Bristol Stomp - kept teenagers' feet on the move. Integration had been achieved on the vocal group front: The Tokens, Dovells, Regents, Dion with the uncredited Del-Satins, and Valadiers, all of the Caucasian persuasion, made it impossible to delineate groups by race. That last outfit was signed to Motown, the Detroit label building momentum thanks to The Marvelettes' blockbuster Please Mr. Postman. The Temptations also debuted on wax in 1961, gearing up for a nice little career.

Philadelphia, Chicago, Los Angeles, Cincinnati, and New Orleans also turned out essential vocal group recordings. The sound had now thrived long enough where it was generating its own brand of nostalgia, Little Caesar and The Romans waxing rhapsodic with Those Oldies But Goodies (Remind Me Of You). An entire generation of youngsters knew exactly what they were singing about.