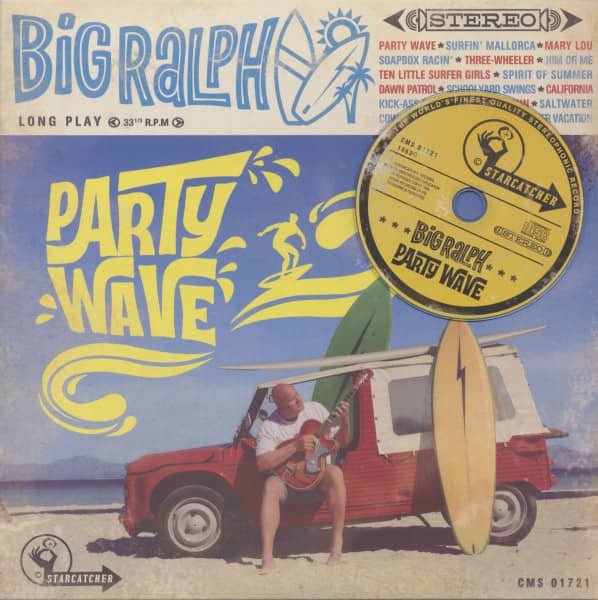 If you heard BIG RALPH's 1961 unique debut album last year, I'm sure you enjoyed the wonderful group harmony. After BIG RALPH finished that project, he wanted to take a break from New York City. On the spur of the moment he decided to fly to San Diego, California for a quiet, relaxing week-long vacation in October 1962.

But things turned out quite differently. On Me palm free lined beach, Big Ralph met a beautiful young girl named Mary Lou. Just a few weeks earlier, she had been attacked by a 14-foot tiger shark while surfing and tragically lost her left arm. However, the strong-willed young girl was already back on her surfboard and competing in national surfing championships as she had in the past. Mary Lou was captivated by BIG RALPH.

They spent every free minute together. She taught him how to surf. She showed him that kisses on the West Coast were hotter than those in New York. She showed him what she considered the most beautiful landscape in the world - California. She sang for him, but it was always the same song. With a smile on her face, she told him that the Beach Boys had written Surfer Girl just for her. BIG RALPH (who was already head over heels in love with Mary Lou) decided to write her a song too. But this time it was going to be a real song, so she wouldn't have to pretend anymore.

One day, while she was surfing and he was waiting on the beach, BIG RALPH wrote down her unique and inspiring story in four verses and gave the song the title "MARY LOU". To record the song in the style he wanted, BIG RALPH had his four brothers (who had accompanied him vocally on his first album) fly in. They went to a studio owned by a friend of his original producer Tony Brambilla of Starcatcher Records (New York) and recorded "MARY LOU" and more than a dozen other songs.

BIG RALPH had written them all on the beach in San Diego so he could have a complete follow-up album right away. In these songs you quickly notice the strong influence of the Beach Boys, but you also hear the influence that happy little Mary Lou and the state of California had on him. There are fireworks of happiness about killer surf tricks, PARTY WAVES, hot rods, THREE-WHEELERS, surfing KICK-ASS DOGS, huge SCHOOLYARD SWINGS, SOAPBOX RACIN' and much more! And it's all about love. Love for Mary Lou. For California. For surfing. For life.