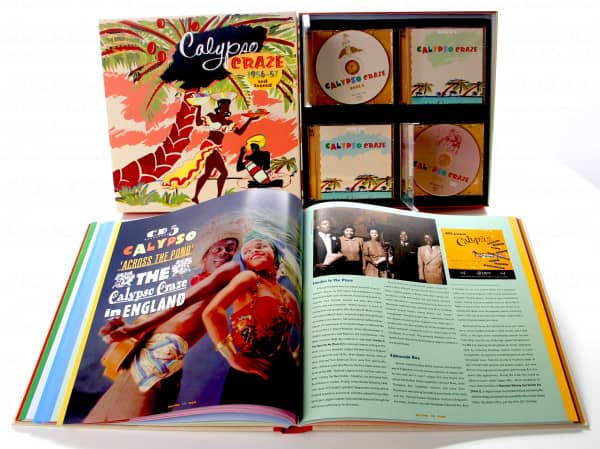 The set comprises six CDs, covering the following topics:
•    Before The Craze: Calypso Hits Of The 1930s, 40s, And Early 50s
•    Belafonte And Calypso - Before And After Calypso
•    Calypso Goes Pop (...and R&B, Rock 'N' Roll, Folk, Country, Comedy, And Jazz)
•    Calypso On Stage And Screen
•    Calypso 'Across The Pond': The Calypso Craze In England
•    Mondo Calypso: The Calypso Craze In The Circum-Caribbean And Around The World

Bonus DVD:
•    Unseen in over 55 years - a 'Calypso Craze' feature-length film never before issued on video or broadcast on television: 'Calypso Joe' (Allied Artists, 1957), starring Herb Jeffries and Angie Dickinson, and featuring Duke of Iron and The Easy Riders
•    Four short 'soundies' from the 1940s and 50s, with Sam Manning and 'Belle Rosette' (Beryl McBurnie), Broadway and big-band singer Gracie Barrie covering Stone Cold Dead In The Market, and Lord Cristo and the March Of Dimes Quartet


In the standard history of American pop music, the 1950s are a parade of rock icons: Bill Haley, Chuck Berry, Buddy Holly, Little Richard, Elvis Presley. But after the demise of the great dance bands of the 1940s, rock 'n' roll didn't actually secure its position as the Next Big Thing until quite late in the day. For a few short months, in fact, it seemed that rock might be just another passing fad - and that calypso was here to stay.

From late 1956 through mid-1957, calypso was everywhere: not just on the Hit Parade, but on the dance floor and the TV, in movie theaters and magazines, in college student unions and high school glee clubs. There were calypso card games, clothing lines, and children's toys. Calypso was the stuff of commercials and comedy routines, news reports and detective novels. Nightclubs across the country hastily tacked up fishnets and palm fronds and remade themselves as calypso rooms. Singers donned straw hats and tattered trousers and affected mock-West Indian 'ahk-cents.' And it was Harry Belafonte - not Elvis Presley - who with his 1956 album 'Calypso' had the first million-selling LP in the history of the record industry. No wonder reporters and marketers joined the trade journals and fanzines in declaring a 'Calypso Craze.' In fact, by the time 'Variety' announced "Hot Trend: Trinidado Tunes" (on the cover of its December 26, 1956 issue), the Craze was already well underway.

How calypso came from Trinidad to America and found such celebrity, vying seriously (if only fleetingly) with rock 'n' roll for the affections of the nation's youth, is one of the stranger tales of modern popular music. This collection offers an overview of calypso's slow rise, heady prominence, and precipitous fall in America and beyond in the period surrounding the Calypso Craze of 1956-57.

Maverick 11-12/12 "This phantastic box set comes with a large book with rare photos, all that you need to know about Red Simpson's life and his music career, alongside session details for all of the recordings."

Blues & Rhythm 2/2015 "This collection is a remarkable achievement,..and a courageous release by Bear Family."