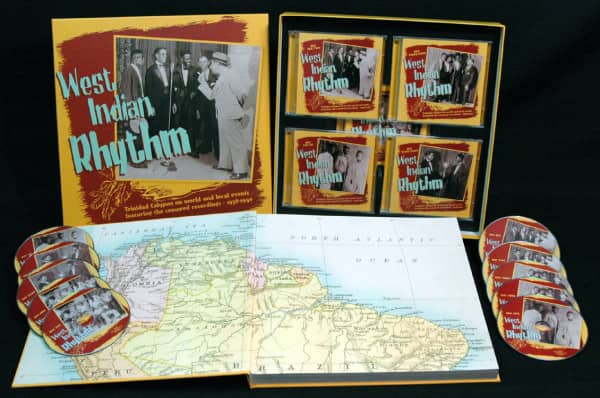 
The ultimate classic calypso anthology! Return with us to Port of Spain, Trinidad during Carnival in 1938, ’39, and ’40. In 1938 Decca Records in New York shipped recording equipment to Trinidad, giving producer Ralph Perez carte blanche to record what is now acknowledged as the greatest library of calypso music ever captured! New calypsos, old calypsos, topical songs, dance bands, shango and shouter Baptist hymns, carnival chants, stick-fighter songs, and much else. The quality, variety, depth and breadth of what Perez captured was so impressive that Decca financed return trips in 1939 and ’40! In all over 267 performances were recorded, and all surviving masters are included complete here on 10 CDs.
35 unissued masters are featured, many not released at the time because of restrictions imposed by local censors who became nervous when calypso bards turned to controversial and political topics; but calypso always thrived on scandal, and told the truth to those in power. And so these songs document sensational labour riots and the political fallout, together with songs that capture the gathering storm that led to World War II. Closer to home, calypsonians addressed and described adulterers, local politicians, sportsmen, thieves, gossipers, peeping toms, prostitutes, and a bevy of colourful street brawlers with names like Joe Laugher, Greasy Pole, Gumbo Lai Lai.