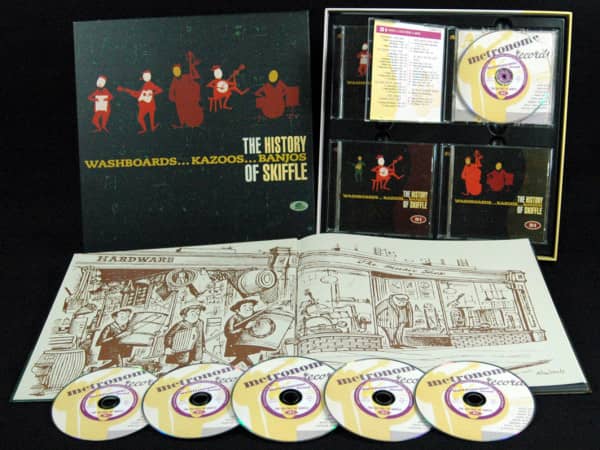 6-CD Boxed Set (LP-Size) with 88-page hardcover book, 174 tracks, total playing time approx. 7 hours 40 minutes. -- WASHBOARDS ...KAZOOS ...BANJOS: This six-CD set is a full, long overdue anthology of the music and musicians who created Skiffle. From the African American forebears of the 1920s and '30s like The Memphis Jug Band and Lead Belly to the fountainhead of Skiffle in the UK, Ken Colyer, this collection includes anthems like 'Down By The Riverside' and 'Midnight Special'. And then came Lonnie Donegan!

The undisputed King of Skiffle is represented by hits like 'Cumberland Gap', 'Rock Island Line', 'Puttin' On The Style', and 'Gamblin' Man' as well as lesser known songs like 'Light From The Lighthouse' and 'The Goldrush Is Over'. -- The popularity of Skiffle exploded with classics such as Johnny Duncan's 'Last Train To San Fernando', Chas McDevitt's worldwide hit 'Freight Train' and The Vipers 'Don't You Rock Me Daddy-O'. This set also includes Continental groups like Roban's Skiffle Group and the Mozam Skiffle Group. -

Skiffle wasn't rock 'n' roll, but it influenced a generation of '60s British beat artists. The Beatles, the Who, the Kinks, Jimmy Page, and many more began in Skiffle groups. An overlooked chapter in popular music history finally gets its due!

Although, as already mentioned, it was primarily a British phenomenon, all the key elements of skiffle actually had their origins in the USA.
The repertoire was a blend of elements from early jazz, blues, spirituals and hymns. Field hollers sung by slaves in the field, prison songs and railway songs all contributed, as did outlaw ballads, folk tunes and country songs. Whether from white or from black traditions, the common factor was that traditional songs were available to all and easy to learn.
Skiffle instruments were equally simple. They first appeared in the streets of New Orleans, when poor people attempted to copy the music played by their better-off colleagues, on primitive self-made contraptions. These small troupes, named 'spasm bands', played almost exclusively on hand-made instruments and borrowed household appliances. Cigar boxes and tin cans were turned into banjos, guitars and fiddles and jugs took the place of the bass or tuba, (the name Jug Band is still prevalent in the USA). Another bass substitute was provided by an upturned tin bath or tea chest with a broom handle attached, from which a string could be stretched. By tugging the handle both the tension on the string and the note played could be raised when plucked by the other hand.
A funnel with a trumpet mouthpiece attached and rice paper wrapped around it passed for a brass section and any available boxes served as percussion instruments. A particular favourite was the household washboard, which provided a varied and satisfying rattling rhythm, when stroked by fingertips covered with thimbles, by coins or bottle openers.
But it wasn't just amateurs who made use of the improvised instrumentation. There are jazz recordings from the 1920s that feature brilliant washboard players such as Jimmy Bertrand, Baby Dodds and Floyd Casey. In the worldwide economic depression from 1929 right up to the Second World War, even the professionals were forced by necessity to make use of the same homemade instruments used by the 'spasm' bands and some became virtuosos.
Bands of the era featured mixed line-ups, with some musicians featured on traditional instruments, while others, having been forced to pawn their trumpet or trombone, took to comb or washboard. Surviving recordings bear witness to the expertise of these pioneers. Money was tight and so began the tradition of 'rent parties', organised by the bands, where the entrance fees helped to meet the musicians' monthly bills.
All these ingredients came together in London after the Second World War and gave birth to the music that has gone down in history under the label 'skiffle'. The key participant was Ken Colyer.

The main recommendation for this set obviously rests in those new issues and in the usual sumptuous Bear Family presentation, with a twelve-inch, hundred-page, hard-backed book, brimming with wonderful photos and other memorabilia.
Blues & Rhythm 8/2013 Brian Smith

If you're a skiffle fan, I cannot urge you enough to get your hands on this epic collection. Bear Family have what you need!
Rhythms 4/13 Samuel J. Fell

$67.85 * $44.08 *
Show all "Various - History" articles
SKIFFLE, MUSIC FOR THE PEOPLE: BRITAIN’S FIRST PUNK REVOLUTION
http://theaudiophileman.com/skiffle/ An emotive word for anyone living in Britain in the ‘50s for it brings with it images of home-made instruments, church halls and home-grown heroes like Lonnie Donegan, Ken Colyer, The Vipers, Chas McDevitt, Johnny Duncan and many others. Ken Colyer pioneered the term in England by describing a small ensemble within his jazz band as a 'Skiffle Group', but it was Donegan's Rock Island Line, a surprise hit in 1955 that really started it all.
15.06.2017
Similar products Customers also bought Customers also viewed
Similar products
Hank Williams: Lost Highway - Graphic Novel (Gebundene... Art-Nr.: 0023044