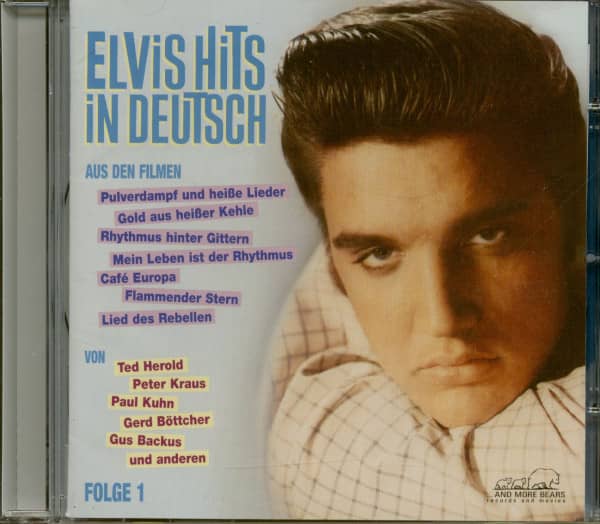 (And More Bears) 23 tracks (53:32) including 32 pages booklet (german) with many pictures.
Besides countless, unforgettable hits, the Elvis movies have long since become legends - just like the songs from these movies. Many of these songs also appeared in German versions,
but naturally scattered to all winds.
Here are all these titles bundled, assigned to the respective films and many titles for the first time on CD.
You can hear songs from 'Love Me Tender' ('Pulverdampf und heiße Lieder'), 'Jailhouse Rock' ('Rhythm behind bars') or 'Wild In The Country' ('Song of the Rebel') and others.
A 'Who's Who' of the German hit in the 50s and 60s provided these titles: Peter Kraus, Ted Herold, Rex Gildo, Bill Ramsey, Gerhard Wendland, Paul Kuhn, Lys Assia and Maria Mucke presented German versions of Presley classics.

He was the Cassius Clay of the entertainment industry - quite simply'the greatest'.

And he would still be today.

All imaginable'King' couplings already exist', you can hear it there. Wrong!

Because...and more bears has come up with something new.

Besides countless unforgettable hits, the Elvis movies have long been a legend - just like the songs from these films. Many of these songs appeared additionally in German versions, but naturally scattered to all winds. ...amb - and this has never been done before - has bundled all these titles, assigned them to the respective films and now presents them for the first time on two tribute CDs.

Songs from 16 Presley films can be heard, such as'Love Me Tender' ('Pulverdampf und heiße Lieder'),'Jailhouse Rock' ('Rhythm behind bars),'Blue Hawaii' ('Blaues Hawaii') or'Wild In The Country' ('Song of the Rebel').

And because at that time also beyond the films attractive cover versions appeared again and again, ...amb adds to the celebration of the (birthday) day immediately: Another 44 Elvis numbers in German on two single discs complete the CD package. And again the star line-up is impressive: besides 'Elvis specialists' like Ted Herold and Peter Kraus, Tommy Kent, Gus Backus, Michael Holm, Ricky Shayne, Peter Alexander, Gerd Böttcher, Bobby Solo and many others belong to the singing congratulators.

With a total of 88 titles, ...amb bows to the'King', reminiscent of one of the most important artists of the 20th century. 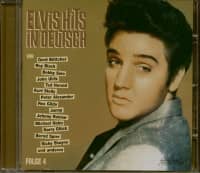