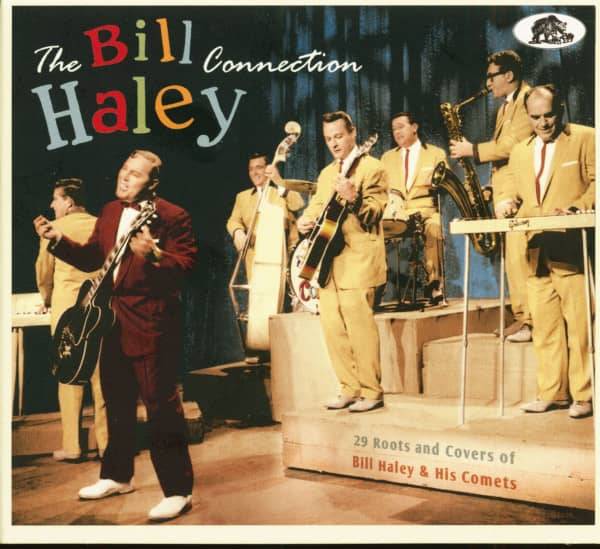 1 CD with 52-page booklet, 29 tracks. Total playing time c. 74 mns.
Bill Haley was the first boss of Rock'n' Roll. Bear Family presents with this compilation the music that has influenced Haley and - in addition - a cross-genre collection of the best cover versions of his classic songs. The CD album covers two decades with recordings from 1938 - 1959!
Sound influences of the early years
When Haley along with his Saddlemen turned to Boogie themes and R&B tracks during the late 1940s, Bill - coming from Western Swing - mixed the styles almost automatically and developed an early form of Rock 'n' Roll music. Most of the black Rhythm & Blues originals, which reach as far back as early Jazz, are included here and range from Count Basie (1938) and Jimmy Preston to Danny Overbea (1953).
Bill Haley's cover songs
Everybody did it back then. Everybody covered extensively black originals, Pat Boone and Elvis Presley, and Bill Haley. Some of the most beautiful originals can be found here, such as the early original version of Rock Around The Clock by Sonny Dae & His Knights, the danceable Corrine, Corrina by Big Joe Turner, the massive I'll Be True To You by Faye Adams, plus Little Richard, Sally Starr, Dickie Thompson and many more.
Bill's songs in versions of other artists and obscure material