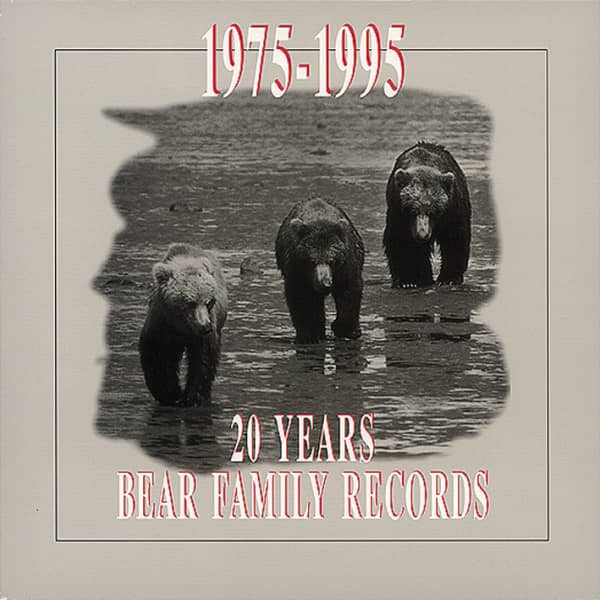 This article is deleted and can no longer be ordered!
Please inform me as soon as the product is available again.
P Secure bonuspoints now
Description Review 1
Description
4-CD boxed set (LP-size) with 96-page book 1975 - 1995 20 Years Bear Family Records A... more
Close menu

A celebration like this doesn't come along very often —only every twenty years.
Over the course of the last two decades, Bear Family has become the byword for quality in reissued music. All kinds of reissued music. Usually Bear Family releases are a celebration of one artist  or another, but here we're celebrating ourselves for a change. We've rounded up an assortment of Bear Songs. In fact, we've got bear songs 'dal you can't bear no more.
Running Bears, Teddy Bears, Jrizz and more beside. Some you know, some you don't, and a few were written especially for us — and we appreciate that.
This set is dedicated to us, and our friends; in fact everyone in the extended Bear Family.

Twenty Years is a long time. Looking back, it seems to have flown by. When I started in Harmenhausen in 1975. I never thought my dreams would come true like they have, and never thought I could make a living from my hobby. Back then, 1 was married and had children, but I didn't have a job and was just trying to get by. At first, we just barely made it. I had to sell the house in the country, and we moved into Bremen. It was an old house in the typical Bremen style on the Goethestrasse.

We rebuilt and remodelled it, and we finally had a small office in the basement covering all of 630 square yards. With help from good friends like Hedy West, Bill Clifton, Roland and Heidrun Zgoll, Mohns Mohnssen, Ernst Grafe, Uwe Pauls and Rudolf Matiasovic as well as an understanding bank I successfully got through those hard times. My partner Hermann Knulle, was a math student at that time, but he was always around when needed, like when we moved from Harmenhausen to Bremen, or needed records hauled from the factory, or needed repairs to Bear Family's family and company car Renault R-4 which had to endure a lot.

In 1977 Hermann finished his studies with a diploma and joined full-time. We leased a Datic computer for which Hermann developed a program that was able to improve our service considerably. In 1979, when the basement became too cramped, we had to move again - this time to a more spacious place in the Eduard-Grunow-Strasse. After just a few years, that building also became too small, even though we rented additional storage space. We couldn't find a building of a suitable size within the heart of the city, and, rather than move to an industrial estate in the suburbs, we moved out to Vollersode, thirty miles northeast of Bremen. That was in 1986, and we still enjoy the great surroundings - the fields, the forests. No parking problems, and no noise - except the sound of good music. We hope to stay here a long time.

A considerable number of people have contributed to the company's health and wellbeing through all these years. Mohns Mohnssen and Gerd Franke, in the very early days, then Detlev Kogel, Wolf Silaff and Claudia Schultz, to name but a few. From our days in Bremen today only Hartmut Onnen, Stefan Kohne and Ohlly M. Ohlhoff are still with us. At the beginning, it was a struggle just to survive. Now we are able to make our record label our first priority. With the backing provided by the mail order operation, we're able to give every record what we think it needs in terms of packaging and studio costs without having to worry too much about profitability.