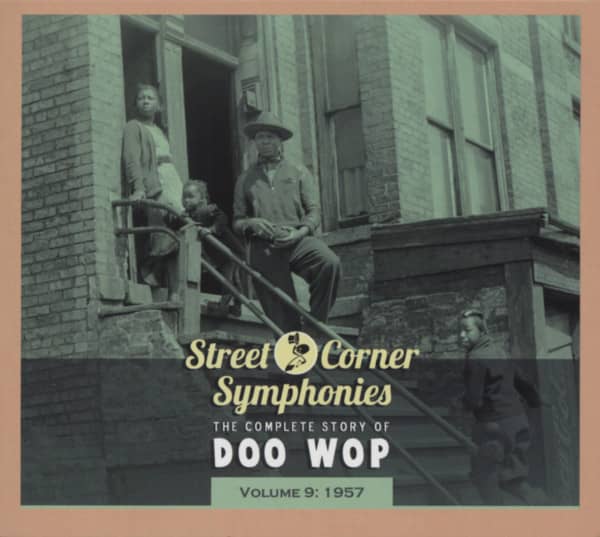 Rock and roll had conquered the vocal group field by 1957, so much that "old-timers" like The Clovers, Drifters, and Midnighters - indeed, most groups sporting even a hint of a bluesy influence in their harmonic blend - were experiencing a decided downturn in sales figures despite cranking out quality platters.  One welcome exception: The '5' Royales, who made a comeback after three years off the charts by updating their sound with Lowman Pauling's brash lead guitar.

The demographics for freshly minted groups were skewing younger than ever. What the great majority of them were singing was classic street corner harmony, an indigenous style that would eventually become known as doo-wop. New York-based newcomers such as The Paragons, Jesters, Cellos, Charts, Shells, Velours, and Rob-Roys were reshaping the sound in compelling ways of their own. Gender barriers were falling like never before. Two of 1957's biggest discoveries, The Chantels and Bobbettes, were New York schoolgirls who scored major hits at the very beginning of their respective careers, boding well for the slow but steady rise of female aggregations.

The proto-doo-wop sound could be viewed as a form of urban folk music, created without the aid of any musical instruments. Teenagers in Harlem, Philly, and Chicago gathered under the illumination of a streetlamp or in the cool, echo-laden confines of a subway station to sing the songs of their more experienced idols (and maybe one or two of their own creations), hoping a wandering talent scout would overhear their efforts and offer them a recording contract. Time and again, that's exactly what happened, though precious few groups got rich off their budding talents, even with records on the shelf. White groups were starting to fully assimilate the doo-wop sound instead of making bland covers for pop airplay. Case in point: The Mello-Kings' debut single Tonite, Tonite stood with the year's best vocal group releases.

The humorous creations of writer/producers Jerry Leiber and Mike Stoller, as expertly delivered by their handpicked quartet, The Coasters, were at last finding the mammoth audience they merited.  And while The Silhouettes weren't as youthful as some of the fresh new faces cited above, the Philadelphia quartet's Get A Job was in all likelihood the year's most important vocal group smash.