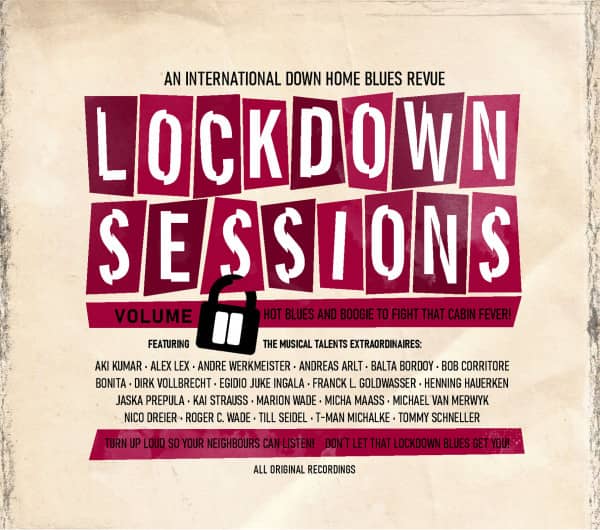 2-CD (Digisleeve) with 16-page booklet. 26 tracks
HOT BLUES AND BOOGIE TO FIGHT THAT CABIN FEVER!
Lockdown Sessions Volume 2.
Who would have thought it? Two years after the release of the now legendary ‘Lockdown Sessions, Vol. 1,’ they are at it again. Two years of battling the effects of the Pandemic have forced many musicians to hustle, including blues musicians: Many live music venues have closed, and many others are fighting to make ends meets leading to musicians having to go to extraordinary lengths to keep afloat. We have seen endless streams, ‘live’ performances from living rooms and even concerts in front of honking cars. When it seemed like the pandemic was over, or at least moving in that direction, some things opened up and life moved outdoors for the most part. That brief lull was relatively short-lived and we went back into a lockdown, or something that was essentially that from the musicians’ perspective.
‘Lockdown Sessions, Vol. 1’ came about as a consequence of the musicians’ drive to create. Volume I was a huge success throughout Europe and sold well on both sides of the pond. Award-winning, it even ended up in the Museum of German History in Bonn, Germany, due to its historical significance. It brought together acclaimed blues practitioners from all over the world, who joined forces to combat cabin fever while the world was on lockdown. All proceeds went to the musicians, with CrossCut Records bringing the record out at no cost, donating time and expertise to the project.
Two years later and ‘Lockdown Sessions, Vol. 2’ is here! Roger C. Wade, an England native considered one of the most outstanding harmonica blowers in Europe, has again spearheaded the project. Never believing there would be a Volume II, Roger, together with his pianist wife Marion, realized the time was right and reached out to musician friends in Germany who had been on Volume I and extended the group to include new faces from around Europe and the US. The group of veterans includes Aki Kumar , Andreas Arlt, Michael van Merwyk, Tommy Schneller, Kai Strauss, and Micha Maass. Newcomers include Bob Corritore, Franck L. Goldwasser, Henning Hauerken, Egidio Ingala, Bonita, Jaska Prepula, Nico Dreier and many more… A total of 21 musicians from 8 countries.
Although it sometimes feels that the world hasn’t moved on much since February 2020, the musicians have adapted to the new reality and have invested heavily in the ability to record, produce and market themselves. Whereas Volume I sometimes saw musicians recording on phones or simple handheld devices, Volume II illustrates just what can be achieved when creativity and modern technology come together. And the result is simply breathtaking! The collection’s 26 tracks on two CDs show the amazing blues talents around the world today. Whether Bonita’s sultry singing, Bob’s sizzling harmonica-blowing, Franck’s fantastic fret-work or Jaska’s superb bass work – all musicians have excelled themselves and succeeded in creating something that would never have happened without the lockdown phenomenon. The recordings cover everything from early country blues to swinging West Coast blues, Chicago blues and several influences from the Hill Country in Mississippi. If anyone was sceptical that Volume I could be improved upon, this double CD proves them wrong - the playing and singing throughout is fresh, exciting, dynamic and really, really good!
Once again, ‘Lockdown Sessions, Vol. 2’ is for a good cause and all funds earned from the project will flow back to the musicians involved, making the transition back into live performance less difficult after what is, hopefully, the final stage of this pandemic. That being said, these recordings again show what the blues community around the globe is capable of doing when it comes together, in unity, to forge alliances, create, exchange and make what is simply very, very good music. Enjoy!