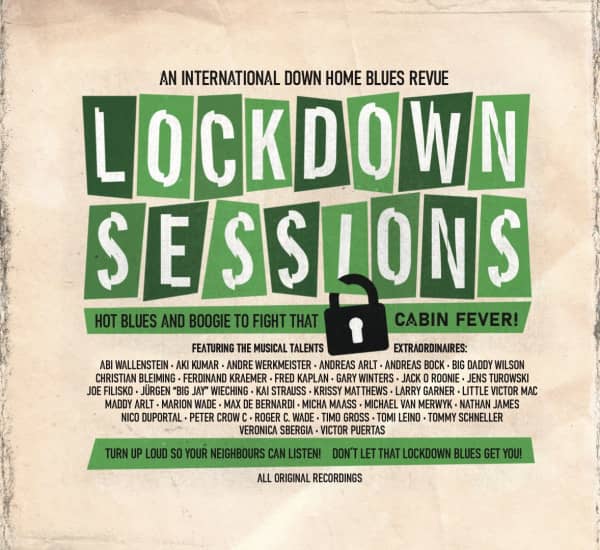 They say necessity is the mother of invention. Right now, we’re seeing plenty of evidence of that. The effects of the ongoing pandemic have forced many of us to scramble and that includes blues musicians: With the closure of live music venues and cancellation of major festivals, they’ve seen their main source of income dry up overnight. Many of them have taken to extraordinary measures to make ends meet, like the countless living room concerts being live-streamed on social media. Denied the chance to perform in front of audiences, it’s their virtual way of passing the hat – and whatever goes in helps each musician survive these tough times.

On the surface, ‘Lockdown Sessions’ came about for similar reasons. The musicians involved are facing the same problems. Yet this border-crossing production is far more than a mere call for support. It’s a one-of-a-kind double CD that brings together more than 30 acclaimed blues practitioners from all over the world, who’ve united to combat cabin fever and transcend physical separation while the world is on lockdown.

The project was spearheaded by Roger C. Wade, an England native considered one of the most outstanding harmonica blowers in Europe. As clubs began closing and gigs started evaporating, Wade reached out to musician friends in Germany, where he’s been based since the early 1990s. He and a few others started trading song ideas, unaware of where this time-killing exercise was heading. Before long, the crème de la crème of Germany’s rich blues scene had gotten involved, including singer-guitarist Kai Strauss, saxophonist Tommy Schneller, multi-instrumentalist Michael van Merwyk, blues veteran Abi Wallenstein and – last but not least – Andreas and Maddy Arlt of B.B. & The Blues Shacks.

Since the musical exchange was not taking place in any studio, but rather exclusively via digital communication channels, there were practically no limits as to who could join in the ‘Lockdown Sessions’. Soon, top musicians from Italy, Spain, Belgium, Finland, France and the UK had joined the party. Many of them have never met or played together onstage. Invitations were sent across the Atlantic as well, and several American and U.S.-based bluesmen made important contributions, including Larry Garner, Nathan James, Aki Kumar , Fred Kaplan and Big Daddy Wilson.

While some may think it impossible to conjure a true blues feeling without being together in the same room, the experienced pros playing on this recording prove it can be done. The collection’s 25 tracks sizzle with energy in showcasing the multi-faceted talents of the players involved. Together, they cast a wide stylistic net covering sophisticated city blues and boogie-woogie, swing, R&B and downhome country blues. The hallmarks of every good blues recording represent the common thread: The playing and singing is authentic, dynamic, real.

It’s true that the release of ‘Lockdown Sessions’ is for a good cause. Any funds earned from the project will wind up in the pockets of the musicians involved, making life just a little bit easier during the pandemic. But beyond that, these recordings fulfill a vital function for all of us: They provide us with a most powerful medicine, a potent dose of the blues, to give us hope and brighten up our days during dark times. After all, the blues has always been there to help us see the light at the end of the tunnel. - Vincent Abbate

Remarkable achievement. Tight and melodic. Cats can do it.

These tracks display how difficult times and circumstances can be overcome by artists willing to adapt. These folks play with soul, joy and great talent. Highly recommend.