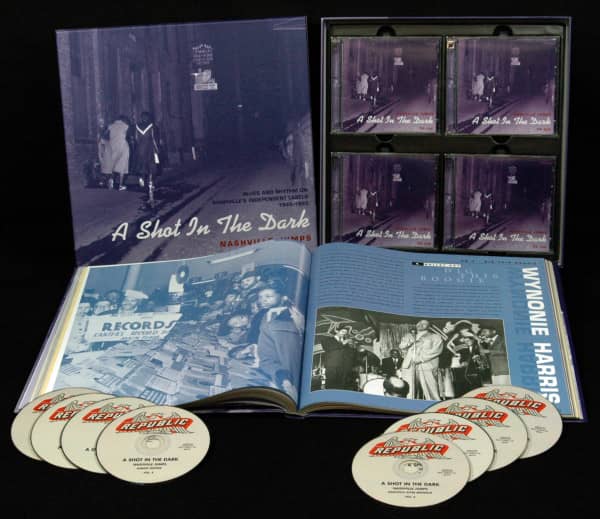 8-CD Box (LP-format) with c. 284-page hardbound book, 200 single tracks. Total playing time approx. 614 minutes.
Today Nashville is one of the three major recording centers in the United States, and has become what it has long proclaimed itself to be: Music City USA. The music, though, is predominantly country, which obscures Nashville's illustrious early reputation as one of the South's focal points for blues, R&B, jump jazz, and gospel.

In 1945, Nashville had no pro-quality studios, no career session men, no record companies, and only one or two music publishers. The city's independent labels played a large role in its transformation. Bullet Records, Tennessee and Republic Records, Excello and Nashboro Records, Dot Records, Hickory Records, and a handful of others recorded country, pop, gospel, and R&B, captured a vibrant local scene, and reflected Nashville music as it really was. This is their story.

The set contains a full-length book. Part one, is the story of the Nashville music business from 1945 to 1955 by Martin Hawkins; the second part comprises song-by-song notes and artist bio's for each individual box by Colin Escott and Martin Hawkins. They include hundreds of rare photos and compelling first-person accounts of Nashville's earliest days.