2-CD Digipak (6 pages) with 152-page booklet, 53 single titles. Total playing time approx. 167:48 minutes.
Second part of the comprehensive overview of Neue Deutsche Welle - across styles and labels - from 1977 to 1985.
All NDW hits, all classics, all mayflies!
From Ace Cats and Die Ärzte via Nena and Spliff to Joachim Witt and Xmal Germany. ...
From hooray, hooray school burns to we like Berlin, from Carbonara to I want fun...
Despite stylistic diversity and creative output, the mass phenomenon "NDW" imploded relatively quickly - a short-lived scene between awakening, art music and industrial mass production. However, the Neue Deutsche Welle grew into an independent scene that can also hold its own well over 30 years later. What began in the mid-1980s as shallow pop had once begun as an uprising against an ossified musical world - and hardly any other musical genre has divided the musical nation (and above all the experts) as much as the "Neue Deutsche Welle". For some it's too weird or too weird, for others it's the departure to new musical shores, an invigorating aspect in the bumbling, and for others it's just too silly or the worst commerce.
In any case, the "Neue Deutsche Welle" was the "only pop event worth mentioning in Germany's popular music since the Second World War" (Thomas Schwebel/Fehlfarben). The Neue Deutsche Welle produced terrible songs that were meant extremely seriously, terribly irrelevant songs that were not meant so seriously, extremely good titles that were meant as such and songs that have outlived time and that are considered real classics today. The musical diversity of the years 1977 to 1985 is described as comprehensively as possible for the first time in the Bear Family series'From Grey Cities Walls' - a short-lived world between awakening, art music and industrial mass production. Four 2-CD sets present the now legendary hits of Nina Hagen, Fehlfarben, Trio, Nena and Joachim Witt as well as rarities of the experimental punk scene and curious finds from cellar studios and self-publishing labels.
Many facets in this panopticon of'new German dance music' prepared the ground for artists such as Herbert Grönemeyer'die Toten Hosen' or Die Ärzte and later influenced German-language hip hop, techno or music trends such as the'Hamburger Schule'. Each episode contains a 150-page booklet with detailed biographies, background information on each song and countless time documents: Advertisements, posters, fanzines, concert photos and record covers. "Listen, be amazed, be in a good mood!"

At the end of the 1970s/beginning of the 1980s, hardly any other musical genre had divided the musical nation as much as the "Neue Deutsche Welle". For the one too weird or too weird, for the other the departure to new musical shores, an invigorating aspect in the bumbling music landscape or an energy boost for an entire industry and for others simply too silly or the worst commerce.

The "Neue Deutsche Welle" was until the early 1980s, before its commercial discovery by the major labels. An authentic underground movement whose origins lay directly in the British punk and New Wave movement.

Several bands of that time could not and/or did not want to take the step to the commercial side of the business and later fell into oblivion. At the end of the 70s it was high time for something to move in the German music scene. For decades, English and American music was copied almost exclusively. The only German/German-speaking stars were Udo Lindenberg, Peter Maffay or Marius Müller-Westernhagen.

The "Neue Deutsche Welle" was the "only pop event worth mentioning in Germany's popular music since the Second World War" (Thomas Schwebel v.d. "Fehlfarben"). The result was an independent scene that still has a market share of around 20% and has been able to hold its own against the major labels for well over 30 years. But there was hardly a music scene whose start was so overslept by the music industry, initially fought, then taken over in a flash, marketed so brutally and ruthlessly and so quickly dropped so ice-cold again. No music style was safe from the label "NDW" - pop, rock, blues, punk, amateurs, folk music, atonal, Schlager, rockabilly - everything was incorporated and labelled "Neue Deutsche Welle". What turned into shallow pop pop in the mid-1980s had once started as a rebellion against a stiffened music world, as a resistance against the cumbersome international pop music.

Own production and distribution

The musicians and bands suddenly produced with the simplest means and began to build their own structures in order to rebel against the gigantomania of the overwhelming major labels, not to be talked into it and to keep control of their "product" ("Rondo" slogan: "Listen in a good mood"). Own production and self-distribution of singles in small quantities, small independent "DIY" (Do It Yourself) - and self-publishing labels like "Schallmauer", "Rondo", "No Fun", "Pure Freude", "Rip Off", "Atatak", "Zick Zack", "Konneckschen" and alternative record shops created the conditions for this.

The use of German texts

The use of German lyrics, which created a new previously unknown feeling of togetherness, had already been successfully introduced by the German punk scene. Both young and experienced musicians, who at that time had hardly anything to lose, got infected by the philosophy and the experiences of the punks. As in the mid-70s, suddenly everything was feasible and possible ("You can do that too"). The dug-out arrangements, the overloaded productions, the "heavy messages" (ICHWILLSPASS) were simply thrown overboard to make way for Spartan instrumentation and simple chord sequences.

Everyone played as they could, composed as they wanted and produced in the kitchen, a corner of the bedroom or - almost professionally - in the garage. The bands recorded records or music cassettes on their own, which they then brought to the shops by themselves at first, then by themselves and were dependent on marketing themselves and their music (Es Geht Voran) 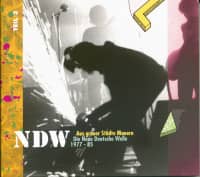 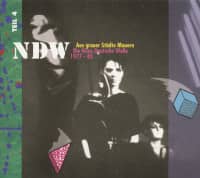