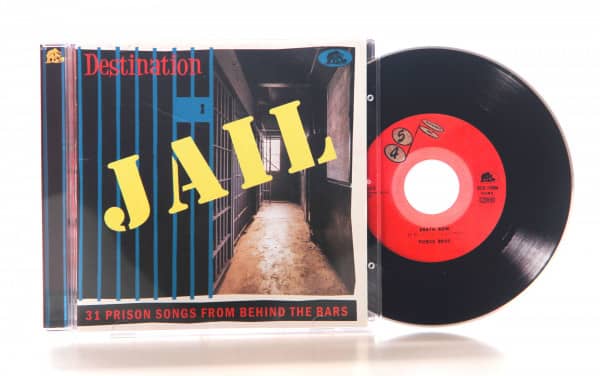 1 CD with 20 page booklet, 31 tracks. Total playing time approx. 79 min.
Incarceration is a frequent theme in American roots music. There is plenty of songs about hideous crimes, boastful escapes, self-pity, and remorseful pleading for a second chance in exchange for XYZ.
Especially in old-time and early country music, we find good examples of the jail theme. One might think the motif may have been derived from pieces from the Anglo-Celtic tradition.
Indeed, songs about murder, theft, and other sinful deeds are frequent in the British songbook, yet, jail, as a metaphor or as a place of self-reflection and transformation, is an American specialty: In the Land of the Free and the Home of the Evangelically Oppressed, incarceration serves as a mirror of the self. Jail is an implicitness, like death, heaven and hell.
With Destination Jail (BCD 17689), Bear Family Records® offers a hodgepodge of hillbilly and rock & roll obscurities and classics dealing with life behind bars. The songs feature all the various elements of the US detention system: prison - county farm, prison, and penitentiary.
Among the better-known highlights, we find The Hanging Tree by Marty Robbins, Ronnie Hawkins' tragical ballad about the “red light bandit” Caryl Chessman, One Dead Man Ago by honky tonk pioneer Jimmie Skinner, and the passionate Midnight Train by the Johnny Burnette Trio.
Top tunes of the obscure portion of the sampled goodies are Benny Hess’ morbid Walking the Last Mile, Helen Grayco’s haunting Lilly’s Lament (Cell 29), and the amazing Shot Four Times and Dying by Bill Carter.
In between, Bear Family Records® offers many goodies by Skeets McDonald, Stonewall Jackson, Webb Pierce, Bobby Darin, and many more – and no Johnny Cash (yet his spirit is evoked by several tracks on the CD).
Bear Family Records®' ‘Destination Jail’ is an exciting and wallet-friendly introduction to the gangsta tunes of rockabilly and classic country.