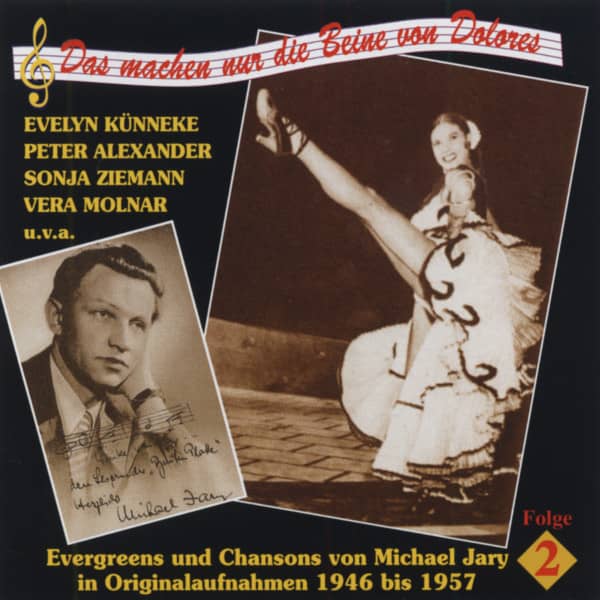 Only the legs of Dolores (CD)
Evergreens and chansons by Michael Jary in original shots from 1946-1967.

Michael Jary was born on September 24, 1906 in the Upper Silesian laura hut. He first wanted to become a missionary, but left the monastery after six years to study at the conservatory in Katowice. He then worked as second Kapellmeister in Plauen, Neisse and Beuthen. In 1929, Jary was accepted into the composition class of the State Academic Academy of Music in Berlin, where in 1931 he received the 'Beethoven Prize'. His teachers were u.a. Franz Schrecker, Arnold Schoenberg, Paul Hindemith and Igor Stravinsky.

After a political intrigue, Jary had to leave the conservatoire in 1933, which also meant the end of his career as a 'serious composer'. He initially wrote arrangements for popular dance orchestras, later worked as an assistant to Leo Leux and Franz Doelle for the sound film. Soon followed the first own film order and a number of hits, which today belong to the standard works of light music: Red poppy, That can not shake a sailor, It does not sink the world, The carousel, through you, this world is beautiful and I know, a miracle will happen once.

The end of the war meant, for Michael Jary, unlike some other colleagues, not the professional end, but a fresh start. Already at the beginning of 1945 he founded the RBT (Radio Berlin Dance Orchestra), and soon afterwards he organized the first radio broadcasts for the Soviet occupiers in the 'Haus des Rundfunks' (now the SFB). With first post-war compositions like Three Little Tales or However, the Sphinx said he went on tour through all zones. Three small stories sung by Evelyn Künneke was also the A side of the first post-war record, which was pressed by the Polydor in late 1946. However, the production of records in those days was still a very tedious business in Germany, and so Jary moved to the studios of the Swiss record label DECCA out. Michael Jary made his first postwar film for the DEFA in Berlin, with more bands following in Munich.

There he met the director Geza von Cziffra, who told his friend Jary of two film producers in Hamburg, who were planning elaborate revue films. That revue movies a la Hollywood are his thing, Jary had impressively demonstrated in 1943 with the music to 'carnival of love'. Therefore, he moved to the Elbe to 'Real Film' (today: Studio Hamburg), where he first brought Zarah Leander as 'Gabriela' back in front of the camera. But that was the last excursion into the UFA memories. From 1950 it was a quick blow, film on film, success on success. The first of its kind was produced with enormous financial and technical effort strips 'The third from the right' in the ...