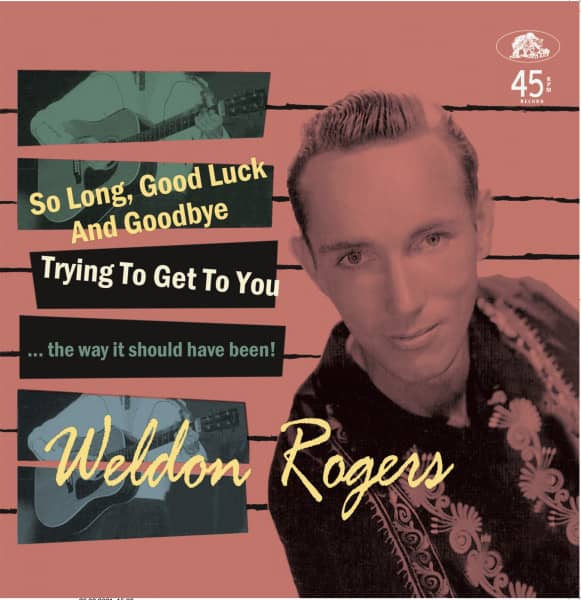 1-EP in picture sleeve, 7inch, 3 tracks, 45rpm, large centre hole, Limited Edition (500)
Bear Family’s Weldon Rogers EP features Weldon’s own version of Trying To Get To You - on vinyl for the very first time! Weldon Rogers, known for his rockabilly banger So Long, Good Luck And Goodbye which is also included on this EP, originally had his own version of Trying To Get To You intended to be on the B-side of his Imperial single. Why The Teen Kings' version was pressed on the record instead can no longer be determined today. Was it Weldon's decision, or that of his label, Imperial? Or did the pressing plant make a mistake? We will never know. In any case, Roy Orbison's version appeared on the B-side, recorded in Norman Petty 's studio about a year prior to Weldon’s session with his band, The Teen Kings.

The Teen Kings are also the backing band on Weldon Rogers' Imperial record, and it sounds as if Roy Orbison can be heard in the background vocals. The Teen Kings had onlysplit from Roy Orbison towards the end of 1957, and it might be possible that Roy Orbisonwas on the spot during the Weldon Rogers session and was part of the backing chorus. Ofcourse, we cannot confirm this one hundred percent, but it seems very likely. We leave the final choice up to you and look forward to your comments and assessments on this.

The bonus track on this 45RPM EP is Weldon’s duet rocker with Wanda Wolfe, recorded at KOB TV Studio in Albuquerque, New Mexico, and released on the ’Jewel‘ label in 1959

what a nice package this is folks regards LJ