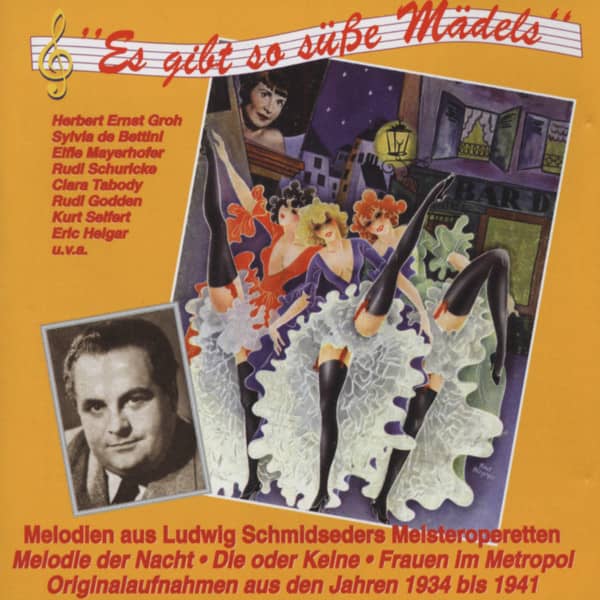 There are so sweet girls (CD)
Evergreens and chansons by Michael Jary in original recordings from 1946-1967.perfect and hit songs by Ludwig Schmidseder 1934-1941

Ludwig Schmidseder A Bavarian citizen of the world was the name of a program that Westdeutscher Rundfunk once broadcast on the composer many years ago. Born on August 24 in Passau, he was supposed to learn, according to the parents' wishes, the 'reputable' profession of a banker, one of the numerous cases in which his parents have completely different ideas about the future of their offspring than the person concerned. Ludwig Schmidseder secretly took piano lessons at the Munich Conservatory during his training, probably knowing that he was destined for something other than counting the money of other people in shirtsleeves. He was attracted by wanderlust.

At the age of 22, he embarked for South America. Rio de Janeiro was the destination, but the big disappointment was not long in coming. As a stranger to strangers, he had to take on any sort of odd job to make ends meet. Finally, he managed to get a Kapellmeisterstelle aboard a steamer of Lloyd Brasilero. With this ship he crossed the oceans until he returned to Germany in 1930.

Berlin lured the big adventure. As a staid musician, he had become on his world travels, he had to start again in the German capital initially small and modest. He started as a bar pianist and released his first own compositions. In 1933 film producer Robert Neppach became aware of the young pianist and engaged him for the music for the film 'The Dream of the Rhine', to which he contributed the song 'What would the world be without love and wine'. The other titles of the film came from none other than the Rhenish poet and singer Willi Ostermann. A short time later, the almighty UFA reported.