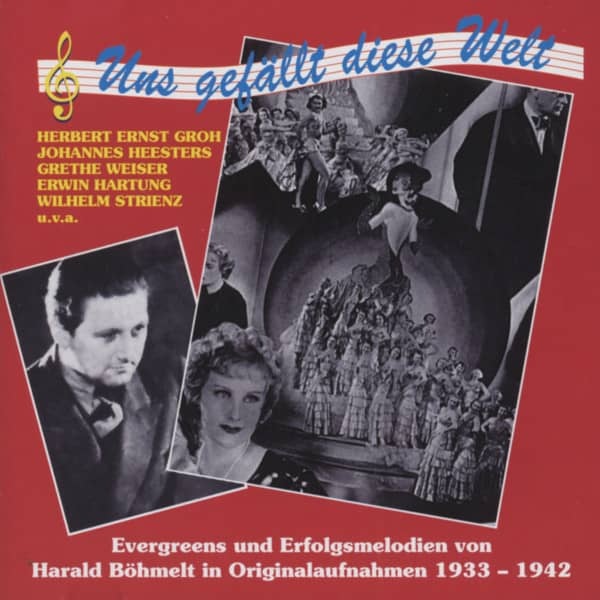 Harald Böhmelt and the actress Käthe von Nagy during singing rehearsals to 'The girlfriend of a great man' (1933)
It was really a start with obstacles, and often enough Harald Böhmelt himself would have asked himself - 'Little man - what now?' Opera bandmaster in Halle an der Saale, this vision of the future did not appeal to Böhmelt, who was born on October 23, 1900. He went to Berlin.

There it was career-wise, however, not as hoped uphill but once steeply downhill. He worked as a silent movie pianist in third-rate Kientopps and was occasionally allowed to conduct an orchestra. As with the emerging sound film and this narrow livelihood had dissolved almost overnight in nothing, Böhmelt had to sing as an entertainer by the Berlin Gartenlokale, with his biggest rival was the unpredictable weather, because: In the rain no commitment - so no Gage. So Harald Böhmelt resisted the will of a Boh & niens. Much further down it could hardly go.

As so often in life, however, it is coincidences that herald a turn of fate. Through a chance acquaintance, he is engaged as a conductor at the Berlin Chamber Opera, and somehow by accident, the Harald Böhmelt composition 'I'll never go with sailors' as BSeite for a record with the actress Anna Sten. A first glimmer of hope ... The director-general of the TOBIS film company senses a new talent and orders Harald Böhmelt to audition. Within five minutes, he is to produce an illustration music to a fictive scene and solves the task with bravado.

A first contract is closed immediately. He is to supervise the movie 'Little Man - What Now' musically and write on this occasion some numbers for the at least already world-famous Comedian Harmonists. But another stroke of fate: When the film came to the cinemas in 1933, the censorship had all the scenes with the popular ...