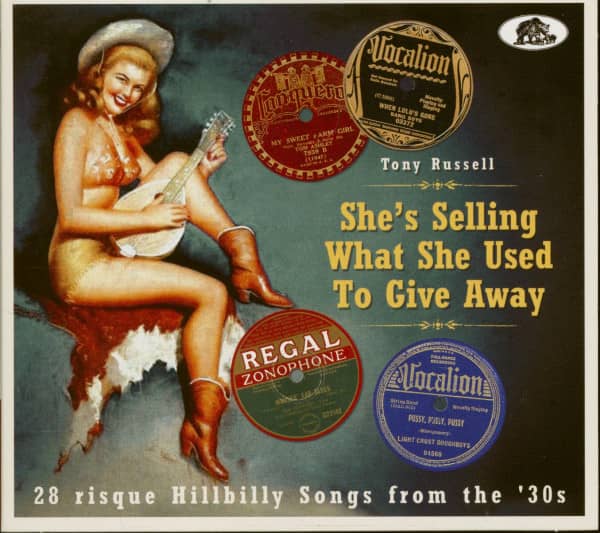 Various Artists: She's Selling What She Used To Give Away (CD)

1-CD DigiPac (4-sided) with 52-page booklet, 28 tracks, total playing time 77:36 mns.
‘In the 1940s Rhythm ‘n’ Blues recordings the double entendre was left to the listener to decipher, in these 1930s hillbilly songs the meaning was very clear!’
A collection of smutty songs full of the ecstasies of self-indulgence, fornicating, drink and narcotics.
Music  as performed in Whore Houses where songs about fornication were joyously received.
Many of the songs would become part of 1950s rockers repertoire albeit with cleaned up lyrics.
Recorded by hillbillies from the blues and western music traditions.
Artists include Jimmie Davis, Cliff Carlisle, the Light Crust Doughboys, Gene Autry, a.o.
The extensive booklet features the song lyrics and liner notes.
Bear Family Records enter into an erotic forum with a boisterous and rowdy 28 song disc ‘She’s Selling What She Used To Give Away’, the disc is housed in a gatefold sleeve and the music is vibrant and clear. This CD should be accompanied with a puritanical warning, ‘These songs containing language, about drinking, sexual contact, whore houses, and the liberal application of Vaseline to an area of the body’.
The musicians featured on this album are hillbillies who were steeped in both the blues and western music, and their tongue was not in cheek as they intonation smutty songs full of the ecstasies of self-indulgence, fornicating, drink and narcotics. The music was performed in places of ill repute, or Whore Houses if you prefer, where songs about fornication were joyously received and were sold to customers, although under the counter! Many of the songs would become part of 1950s rockers repertoire albeit with cleaned up lyrics.
To country folk Roy Acuff had a ‘milk and honey’ reputation, however his skills with the pen reveal his ‘Guinness’ side, When Lulu's Gone was released under the group name Bang Boys, and what can we say lady mention in the song? Well she likes to entertain and more than one man for certain. The three songs from Hartman’s Heartbreakers are the crème de la crème of smuttiness, the combo had an alluring chanteuse, Betty Lou deMorrow, her warbling would raise the eyebrows of any man! This enchantingly and titillating song thrush chants lust-filled pleas while the band members tease her with equally lust filled responses and catcalls. During Feels So Good, her man gives her enough fun with no strings, No Huggin’ Or Kissin’, it’s clear she is not following mamas rules. The Yo-Yo mentioned in Let Me Play With It is an euphemism for the sexual organs.
Singing cowboy Gene Autry croons the short and salacious Bye Bye Boyfriend, he found the nest between her legs, as he slammed her against the wall, and she in turn found her new partner. Autry serves up a narrative Frankie And Johnny, that differs from versions by Messer’s Feathers, Gracie or Cash et al., here the murder takes place in the Whore House. Before the church going Tennessee Ernie Ford offer a bright and breezy version of Nobody’s Business Riley Puckett croons incriminating evidence of a dream to kill his wife, she spends all his money and the blame is landed upon morphine, which makes him crazy.
The succinct country humor is clear through this album and the mention of pussy comes up often, well it can be stroked but most certainly not a pet, it’s a call for human-bonding. Prime examples being the call and response Pussy, Pussy, Pussy, the Light Crust Dougboys are in the need of relaxation and on the prowl. Jimmie Davis modulates Tom Cat And Pussy Blues in the style of the Singing Brakeman, this recital is a tale of a purchase of a woman, while his bluesy She's A Hum Dum Dinger (From Dingersville), an ode to a hot young sweetie, that upon entering the church made the preacher lay his Bible down! Two decades later without change the song was injected with bop beat by rockabillies Hank Stanford and Hank The Cowhand.
The climax is full of western swing energy and a culmination of vulgarity Red's Tight Like That is a tale from the Tune Wranglers about a red head who’s real tight, and it’s not the music groove the boys mean.
These titillating and salacious dirty rhythms can be learned from the booklet which features the lyrics for your lust addicted pleasure. Your morals will not be judged upon purchase and should the Jehovah Witnesses come a calling, the volume button on your Hi-Fi may be increased!
- Mark Armstrong, Bühl, Germany, 23 February 2018

Article properties: Various Artists: She's Selling What She Used To Give Away (CD)

Review 4
Read, write and discuss reviews... more
Close menu
Customer evaluation for "She's Selling What She Used To Give Away (CD)"
From: BF Presse On: 18 Jun 2018

Tracklist
Various Artists - She's Selling What She Used To Give Away (CD) CD 1
01 When Lulu's Gone
02 Feels Good
03 Red Nightgown Blues
04 Wind The Little Ball Of Yarn
05 How Long?
06 Ash Can Blues
07 My Sweet Farm Girl
08 No Huggin' No Kissin'
09 She's Killing Me
10 She Wouldn't Be Still
11 Somebody's Been Using That Thing
12 Tom Cat And Pussy Blues
13 Pussy, Pussy, Pussy
14 Mouse's Ear Blues
15 Bye Bye Boyfriend (Blackbird)
16 It Won't Hurt No More
17 Bucking Broncho (My Love Is A Rider)
18 Doing It The Old Fashioned Way
19 She Came Rollin’ Down The Mountain
20 Nobody's Business
21 Jellyroll Blues
22 Let Me Play With It
23 Oozlin' Daddy Blues
24 Everybody's Truckin'
25 Frankie And Johnnie
26 She's A Hum Dum Dinger (From Dingersville)
27 She's Selling What She Used To Give Away
28 Red's Tight Like That