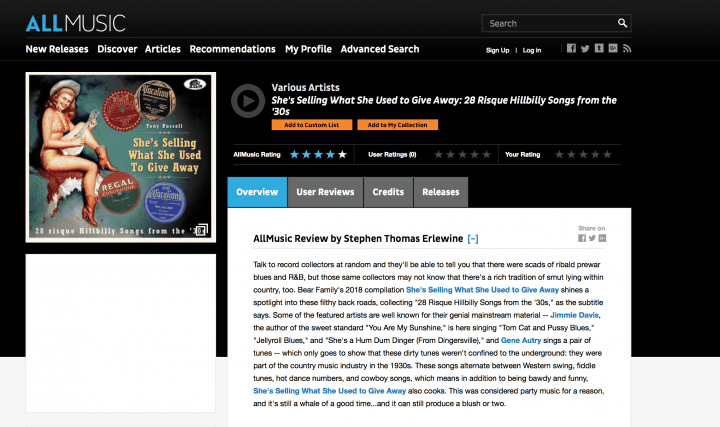 AllMusic Review by Stephen Thomas Erlewine [-]
Talk to record collectors at random and they'll be able to tell you that there were scads of ribald prewar blues and R&B, but those same collectors may not know that there's a rich tradition of smut lying within country, too. Bear Family's 2018 compilation She's Selling What She Used to Give Away shines a spotlight into these filthy back roads, collecting "28 Risque Hillbilly Songs from the '30s," as the subtitle says. Some of the featured artists are well known for their genial mainstream material -- Jimmie Davis, the author of the sweet standard "You Are My Sunshine," is here singing "Tom Cat and Pussy Blues," "Jellyroll Blues," and "She's a Hum Dum Dinger (From Dingersville)," and Gene Autry sings a pair of tunes -- which only goes to show that these dirty tunes weren't confined to the underground: they were part of the country music industry in the 1930s. These songs alternate between Western swing, fiddle tunes, hot dance numbers, and cowboy songs, which means in addition to being bawdy and funny, She's Selling What She Used to Give Away also cooks. This was considered party music for a reason, and it's still a whale of a good time...and it can still produce a blush or two.