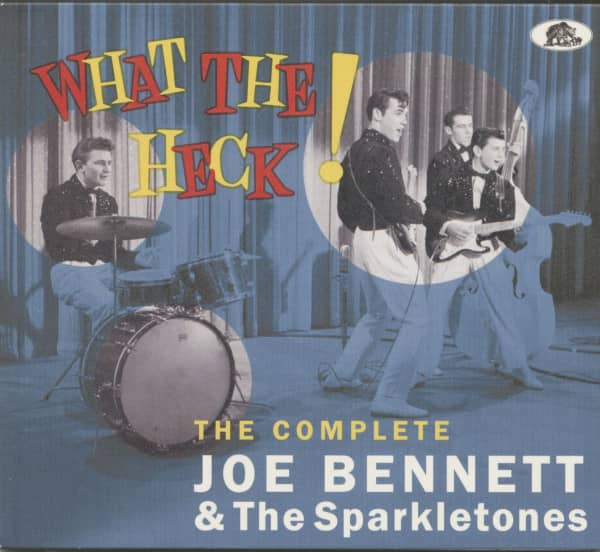 1-CD (Digipak) with 32-page booklet, 38 tracks. Total playing time approx. 79 min.
Only in their mid-teens and full of fire, Joe Bennett and The Sparkletones roared out of Spartanburg, South Carolina in 1957 with a rocking ditty extolling the classy virtues of Black Slacks. Bennett played sizzling lead guitar and sang in tandem with rhythm guitarist Howard ‘Sparky’ Childress, while bassist Wayne Arthur and drummer Jimmy ‘Sticks’ Denton laid down a mighty commotion behind the pair. Bear Family Records® pays tribute with new collections that underscore just how savage these cats’ rhythms were on Boppin’ Rock Boogie, their second hit Penny Loafers And Bobby Socks, Rocket, Cotton Pickin’ Rocker, and We’ve Had It.
The 10-inch LP collects the very best of the group’s ABC-Paramount and Paris sides, while the CD follows Joe and the Sparkletones from their debut single through everything they ever cut and then some, including their hard-to-find ’65 ‘comeback’ single on ABC, the contents of several 1964 EPs that Joe waxed in Spain while he was in the Air Force, The Sparkletones’ historic ’57 appearance on Nat ‘King’ Cole’s TV program, and Billy and Eddie’s The King Is Coming Back, a 1959 rarity that Bennett co-wrote about Elvis’ impending return from the Army but didn’t sing. Curiosity on the side: the 1964 recordings feature drummer Mickey Hart, later one of the percussionists of the cult band The Grateful Dead.

Pull on your Black Slacks and commence to dancing with Joe Bennett and The Sparkletones!

Joe Bennett and The Sparkletones

Joe Bennett and The Sparkletones were only in their mid-teens when they came blasting out of Spartanburg, South Carolina in 1957, chock full of vim and vigor and ready to conquer the pop hit parade. Their extreme youth was no deterrent to immediate success; when Black Slacks, the brash rockabilly quartet’s debut single for ABCParamount Records, took off up the charts that autumn, they were polished enough to knock the audience dead on ‘The Ed Sullivan Show,’ CBSTV’s top-rated Sunday evening variety program. With Bennett (born February 21, 1940) on vocals and lead guitar, Howard Childress (born April 21, 1943) on vocals and rhythm guitar (the two sang in tandem on most of the group’s recordings, with Sparky’s high-pitched harmonies, hiccupping yelps, and fleet dancing feet onstage adding a singular weapon to their considerable arsenal), Wayne Arthur slapping upright bass, and harddriving drummer Jimmy Denton, Joe and The Sparkletones could heat any stage up to the boiling point.

The band formed in 1955, ranging in age from 12 to 16. “It originally started out as a group called The Jamborettes, which had several members,” says Denton. “Had some girls, dancers. It was just a little neighborhood gathering. They’d put on a show on Saturday night in their neighbor’s front yard, and people would drive up there in their cars, like the drive-in movies, and watch the performances. Which you can imagine what it was like, with a bunch of kids.” Bennett and Arthur grew up just down the road from one another. “We were always good friends in grammar school,” says Wayne. “We both went to Cannons Elementary.” He remembers Joe hosting “a Saturday night jamboree in his front yard. And I’d go down there and watch. And he asked me one time to sing, and I said, ‘Yeah, I’ll do that!’ So every Saturday night, a bunch of us kids would get together.

Cars would come by, stop on the side of the road. We’d pass around a hat and do that. And we did that for a couple of years. I think I was about nine when we started that. “Then we met up with Jimmy Denton and Howard Childress. We met Jimmy through school. And Howard was much younger than we were. We met him at a talent show here in Spartanburg, so he came with us. I didn’t play anything at the time, so we had two guitars and drums, and Joe told me, he said, ‘We need a bass man!’ So I told my dad, and my dad said, ‘Okay,’” he continues. “We went to a music store and he bought me a bass fiddle. And I went and took enough lessons to learn where everything was, and we started The Sparkletones.” “It was fun, and it just kind of morphed into the four of us,” says Jimmy. “Actually, I say five, because we had a female vocalist at one time. But when things got to where we were able to travel— back in those days, it was different than it is these days. So unfortunately, we had to let her stay home. Which was not the best thing that we wanted to do, but it was just a necessity.”

Bennett and Arthur grew up in a community near Spartanburg known as Cannons Campground. “During the Revolutionary War, Colonel Cannon had a camp out here in the area where I live. So when they started building homes and farms and doing stuff, they decided to call it Cannons Campground,” says Wayne. “It was less than a mile from my house to his house. We both went to Cannons Elementary.” Howard hailed from nearby Clifton. “It wasn’t a town, it was just a community,” explains Wayne. Jimmy came from neighboring Cowpens. “Cowpens is about five or six miles out of Spartanburg,” he notes. Everyone in the band went to Cowpens High School...