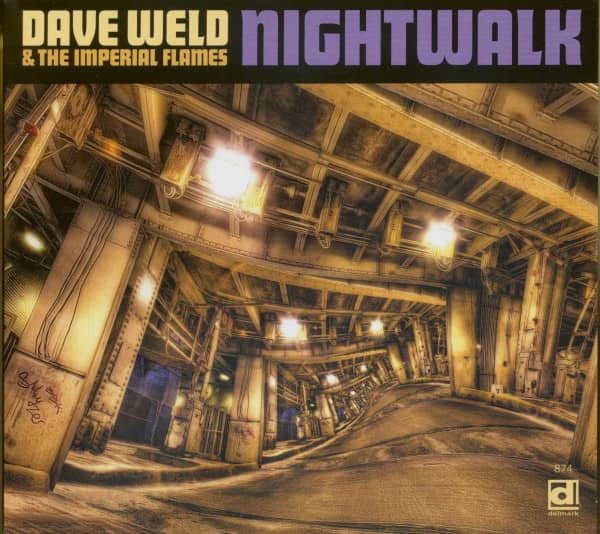 Good luck finding another musician who has been so determined to follow the verities of Chicago blues and so earnest about giving his heart and soul to the music he's played as a guitarist on countless thousands of gigs since the 1970s. "I learned my trade from the masters," Weld says. In his formative years, the native Chicagoan gave a good accounting of himself in rough-and-tumble South and West Side clubs while in the fast company of Otis Rush, Hubert Sumlin, Detroit Junior, Eddie Shaw, Houserockers Ted Harvey and Brewer Phillips and, among others, J. B. Hutto. Slide guitar hellraiser Hutto was Weld's primary mentor. "J. B. had more faith in me than I had in myself. He gave me a sense of worth because he entrusted second guitar duties to me for all his practice sessions. He told me, 'Don't let anybody tell you that you can't make it.' Then he said, 'Now you lead.'

I had to because he was my idol, and he knew things I would not find out until 20 or 30 years later about music, about bandleading, about practice and songwriting, about other bluesmen, about women, about life." Confidence soaring, Weld connected with Hutto-inspired guitarist Ed Williams and bassist James Young —both nephews of Hutto—to form Little Ed and the Blues Imperials at the end of the 1970s. Weld continued playing with this acclaimed group till he started up his own band, the Imperial Flames, in 1988. They've been on a roll ever since with countless club and festival appearances in Chicago and around the country and overseas. Weld and his band have made two well-received Delmark albums, Burnin' Love (2010) and Slip Into a Dream (2015). Now there's a third. Nightwalk, provides further proof of Weld's rare ability to bring his own distinctive style and innovative interpretations into the blues while upholding the great tradition that is the music's quintessence. On display too is the guitarist's ongoing creative alliance with band singer Monica Myhre and other simpatico collaborators. "We had to move forward in the blues world in our writing and playing," he says. "This required, even more, being true to ourselves. It was actually a conscious move to go back and find that original inspiration and creative energy we first had when we started in music. It was the same effort, the same energy, the same desperation of commitment that tells you, either this works or I am a complete failure."

Weld needn't have worried. All turned out well. After some give and take, he and Myhre realized their ideas for arrangements, lyrics, melody, tempo, timing, rhythm intros, solos. Nashville-based Gram-my-winner Tom Hambridge turned out to be an inspirational producer. "He was always positive and never hesitated in directing us in each track," Weld recalls. "He built confidence in what we were doing." There were also productive partnerships made with Hambridge's engineer Mike Saint-Leon, who "found sonic truths in each song and he was always open to what we wanted," and with editing-and-overdub engineer Brian Leach, who "came up with answers to really tough issues such as timing, delivery and execution."

Moreover, Weld and Myhre kept all the musicians—Imperial Flames drummer-vocalist Jeff Taylor, pianist Harry Yaseen, bassist Kenny Pickens and saxophonist Rogers Randle, Jr, along with guests like globe-trotting saxophonist Sax Gordon, honorable harmonica player Billy Branch and first-call Canadian keyboardist Graham Guest at the very top rung of their capability. The songwriting of Weld and Myhre is outstanding in its attention to emotional states and in its imaginative range. Myhre's passionate vocals stamp "Don't Tell Mama" (about a secret shared by sisters that protected their mother) and "She Was a Woman" (an anthem for strong women) with the redemption of a hard-lived life. Its lyric split between English and Spar ish, "Donde Vas" celebrates a night of dancing to the strains of a mariachi band while "Cry, Cry, cry" finds Myhre convincingly essaying a true tale of a woman who has given the boot to a two-timing man.

Throughout the album, Weld's guitar work captures and communicates excitement—as a slide specialist he's at the apex of his considerable powers. The man's also a battle-tested, strong singer, check out "Don't Ever Change Your Ways" (his inspired thank-you to Hutto for all that sage advice) and to no-nonsense refurbishments of 1953 Hutto tunes "Now She's Gone" and "Loving You" (the latter fused to Bukka White's good ol' "Jelly Roll Blues"). On "Mary Who," Weld's singing and guitar work express the urgency of lyrics about an abused prostitute on the West Side in the 1970s. This emotional blues, a plea to remember the forgotten, weighs on the listener's heart. Timeless in its application of blues rudiments, Nightwalk aspires to be both entertaining and thought-provoking. It succeeds admirably.
-FRANK-JOHN HADLEY DOWNBEAT

SURPRISE! THE GOLD STANDARD IS SET FOR FIERY MODERN-DAY CHICAGO BLUES WITH THE RELEASE OF SLIP INTO A DREAM.

Certainly needing reinvigoration, the genre gets red-hot shots of adrenaline when guitarist Dave Weld performs in a recording studio. He and his Imperial Flames purposefully torch their second Delmark album, the follow-up to 2010's BURNIN' LOVE (Delmark 806). After all, Chicago blues is Weld's life-blood, his very existence hanging on a deep infatuation with Hound Dog Taylor, J. B. Hutto and other hold-nothing-back pyrotechnists in the hallowed canon. Immersed within West Side club action since the 1970s, Weld today makes the rounds as a beacon of passion and stability in a genre largely reduced to tired formu-las.

Conveying a musical tension usually set at the boiling point, Weld makes sure SLIP INTO A DREAM does the job it sets out to do, provide his faithful fans and new con-verts with superior entertainment through terrific jolts of newly forged music that pos-sess a ragged-edge spontaneity. Weld, a communicator, said of the session, "Our concept was to go through the process, do the really hard work correctly and honestly, to bring the audience our best effort, our best ideas, our best expression of emotion, in relation to what we see as commonality in human nature. And we just wanted to go in the studio and play our ass off!" Total success. Weld and singer Monica Myhre (Dave's loving partner) and the other band members—pianist Harry Yaseen, bassist Dave Kaye, drummer Jeff Taylor—attain wild, rapturous heights in twelve original songs and one cover, Hutto's 20% Alcohol, while staying on the ebullient emotional arc of the music they love.

They're bound to rules governing blues expression but the knot is not restric-tively tight. They show confidence in their ability to bring fresh, slashing immediacy to the material. The band never lacks for vivid presence. Myhre merits a place in the top-tier of contemporary blues sing-ers for her solid contributions, whether in a volatile rough-housing mode or evidenc-ing an even-keeled temperament (nota-bly on Sweet Love and Walk on Down). Following the way of his heart, Weld converges self-possession with techni-cal artfulness in guitar fulminations which manifest his many years gaining intima-cy with the blues—he's plied this trade over thousands and thousands of nights and occasional days. And this dexterity extends to the nitty-gritty and nuances needed for successful blues singing and songwriting. The man does it all.

A native of Lake Forest, a picturesque city north of Chicago along Lake Michi-gan, Weld studied history and journalism at New Mexico State University before returning home for the blues life. He initially earned his keep playing with ex-Hound Dog Taylor sidemen Brewer Phillips and Ted Harvey at Sweet Peas, then joining up with several former bandmates of Howlin' Wolf in the house band at the 1815 Club. Weld's affinity for the blues was apparent to those wary, seasoned veterans. An important sup-porter was Hutto, a highly regarded slide guitarist with extensive credits, including two albums cut for Delmark, HAWK SQUAT (Delmark 617) and SLIDEWINDER (Delmark 636). Weld noted, "J. B. was the most authentic blues guy I knew (who was) closest to real blues from the South being played on electric guitar. His vocals hold true today, and his words are intense and personal. J. B. gave me band-leading advice, songwriting ad-vice, and life advice."

Weld's comfort with urban blues was further illustrated when he took on rhythm guitar duties in the fast company of his slide guitar-playing friend Lir Ed Williams in the raw-and-rowdy band they called the Blues Imperials. The acclaimed 1986 Alligator album ROUGHHOUSIN' captured their incandescent spirit. Weld was with the Blues Imperials for about ten years before branching off in the late-1980s to lead his own outfit. The Imperial Flames have had several incar-nations over the years. Past members include luminaries like Lil' Ed, saxophonist Abb Locke, drummers Ted Harvey and Vernon Rodgers, bassists Herman Apple-white and Mike Scharf, and pianists Leo Davis and Donny Nichilo. Weld is espe-cially appreciative of two guys who've long stuck by him: Bernard Reed, a bass player and Jeff Taylor, a drummer (both have also worked with leading blues and r&b acts in the Windy City). To date, the Imperial Flames have performed in 26 states, 11 countries, and at about three dozen festivals, among them the Montreal Jazz Festival and, naturally, the Chicago Blues Festival. With SLIP INTO A DREAM, Weld and the Imperial Flames, along with guests Bobby Rush on harmonica, Gordon Beadle on scalding saxophone, AND Greg Guy on guitar, come at the listener with happy vengeance. They square blast furnace fun with a collective sense of conviction. "Ev-ery song comes out of a groove we love," said Weld. "We fulfill the songs' potential." --Frank-John Hadley, DownBeat