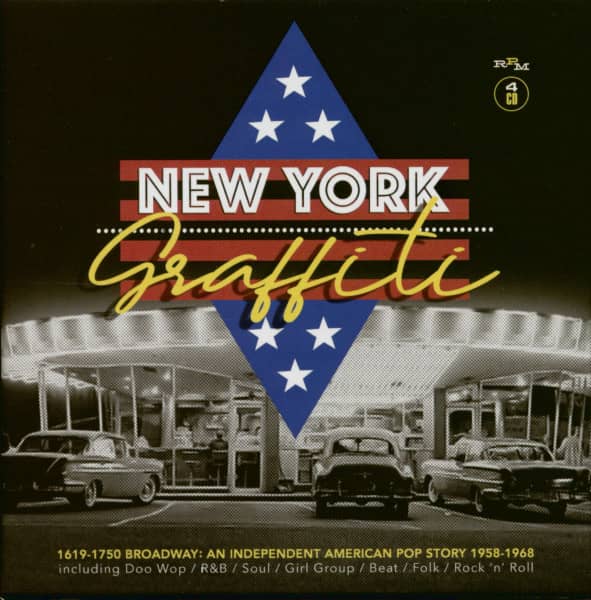 Some Americans reference the music of their parents from the late 1950s to mid-1960s as the American Graffiti generation. The term coined by George Lucas in his movie homage to that period and the youth coming of age during that time. And so RPM uses that reference as it’s setting to focus on the records produced by a group of music companies operating in the ‘tin pan alley’ of New York from the Brill Building at 1619 Broadway and up around the block.

A fascinating story emerges surrounding the growth of a group of independent US Publishing Companies, some 28 in number, the oldest of which Broadway Music was founded in 1914, and how by the end of 1968 all had come under the ownership of one, the Edward Kassner Music Company.

New York Graffiti is set in the time when the song publishers launched their own in house record labels. Not only that, these companies were part of the business as a vertical integration of publishers, writers, arrangers, producers, labels, studios, artists, management, DJs, radio. Most in the same district of New York, often in the same building. With control of ‘the Song’ then it was about manipulating as much as possible around it’s exploitation for maximum commercial exposure. With our group of Publishers they specifically launched and ran the labels Joy Records, Seville Records, President Records, Duel, Gulf, Shell Records, Select, and the recordings on this collection are drawn from them.

An 80 page perfect bound book(let) reveals this story in detail, including photos and images never before published, history of the songs, along with biogs of every artist in the box. These include the singer / songwriters Neil Diamond’s early single as Neil & Jack, and Tom Pacheco in his first band The Raggamuffins, artists Shirley Ellis pre-‘Clapping Song’ as Shirley Elliston, soon to be backing Elvis and Dusty in American Studios ‘Memphis Boy’ Bobby Wood, pre-Three Degrees producer Richard Barrett, ‘Montego Bay’ Bobby Bloom during his time with The Imaginations.

And many examples of where the Song is King such as Prisoner of Love, a 1946 Perry Como record, here as a glorious swing beat number by Billy Duke months before James Brown’s soul defining version. Ricky Shaw’s stab at Rick Nelson with A Fool’s Memory subsequently covered by Billy Fury, Bobby Sherman’s RnB classic Do You Want To Dance here given the then-on-trend ‘twist’ treatment by Joey &The Twisters just before Cliff Richard’s upbeat pop version, Earl Wade’s bossa version of Feel So Bad which was soon followed by Elvis’s hit single version, and more obscurely Laura Lynn’s beautifully swooning It Took A Long Time Coming then covered by Robert Plant as an early solo single.

Not to mention the label’s own hits including ‘Bobby’s Girl’, ‘Shout Shout (Knock Yourself Out)’, ‘Little Band Of Gold’, ‘Heartbreaker’, ‘Hootenanny’, ‘Pushin’ Your Luck’.

Over half the set is on CD for the first time with three tracks previously unreleased, two more freshly mixed down from multi track tapes. Many very collectable, such as the garage sound of The Barbarians, the early Neil Diamond as Neil & Jack, Northern and early Soul classics including those from Pat Hervey, Roger Pace, Linda Cumbo, Pat Jarvis, Sonny Stiles, The Kampells, Millie Foster, Curtis Knight. This gorgeous box set comprises over 100 tracks and 250 minutes of music.

A wide variety of 60's music. Some hits, some not, but all good. A bargain buy.