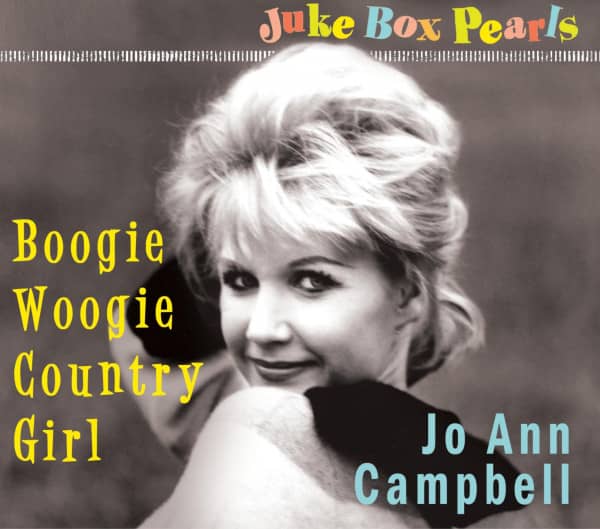 
Jo Ann Campbell had it all looks, talent, and great records. In just two years she went from a wide-eyed fan at an Alan Freed rock n roll revue to becoming one of Freeds most popular stars. She performed for thousands of fans, proving that she could rock just as hard as any of her male contemporaries, and she wrote her own songs and recorded numbers by some of the top songwriters of the day. Although she only scored a few national hits, her recordings for Eldorado, Gone, Rori and ABC-Paramount mixed a cute, girl-next-door charm with lusty, growling rock n roll vocals in such classics as Come On Baby, You re Drivin Me Mad, Wassa Matter With You Baby, Mama (Can I Go Out Tonite), Boogie Woogie Country Girl and many more.

Jo Ann Campbells CD, the newest installment in Bear Familys Jukebox Pearls series focuses on the original Blonde Bombshell with 37 tracks that comprise a comprehensive overview of the best of her rock n roll recordings from 1956 to 1962. The set includes her rare, debut single for Point Records, I am Coming Home Late Tonight b/w Where Ever You Go, along with several previously unreleased numbers. It is the essential collection of an unheralded and all-too-often overlooked Queen of Rock nRoll!

In the late 1980s, I discovered the 'mystery girl of rock 'n' roll.' I was a recent convert to the sound of rockabilly, and I was buying every album of rockabilly songs I could get my hands on, which in those pre-Internet shopping days, wasn't many. One of the first collections I found was '20 Rockabilly Classics,' a 1987 CD produced by MCA's office in Nashville. One track, Boogie Woogie Country Girl by Jo Ann Campbell was a brassy, sexy, frantic rocker that was impossible to resist, even if it didn't contain much hillbilly influence beyond its rural-sounding title. Who was this person? The only information listed on the album in regards to the song was the date of recording (1961) and the fact it was previously unreleased.

How could this be?  How could such a great recording sit in the vaults, forgotten and ignored, for 26 years? Eventually, I found the answers and discovered the story of a true forgotten rock 'n' roll pioneer, the original rock 'n' roll Blonde Bombshell – Miss Jo Ann Campbell.

Born in Jacksonville, Florida on July 20, 1938, Jo Ann Campbell began performing at the age of four when her mother enrolled her in dancing school. She frequently won talent contests in the Jacksonville area and by the time she entered high school, was an accomplished dancer. But dancing wasn't her only passion, as she told Stuart Colman in a 1997 interview.

"I would get out of school, rush home and listen to the radio every day from 3:00 p.m. to 5:00 p.m. Jacksonville had one real rhythm & blues station, and after I'd done my homework and had my supper, I'd tune in again at nine o'clock through until bedtime. The music was really in my blood."

Although Jo Ann was a die-hard fan of R&B, and also a fan of pop, she had little exposure to country music. As she told music fan Billy Poore, "I didn't know what (country music) was or (that it) even existed, because the group of kids I was friends with never listened to it."

As majorette with the Duncan U. Fletcher High School Band, Campbell won the Florida State Baton Twirling Championship in the summer of 1954. The honor led to a USO tour of U.S. Army bases in Europe and eventually big changes for the Campbell family.

"My parents realized there was little chance of me making a career around Jacksonville," Jo Ann told Stuart Colman, "so they made the bold decision to move the family to New York. With the help of a $350 loan from my Nanny and Granddaddy, we headed off…We settled in and daddy got a job selling cars uptown and mom enrolled me in a local dancing school. After a couple of months we moved to an apartment on Long Island, and I went back to high school. The only problem was I had to commute on the subway to my (dance) lessons and I would get home late, so it was a tough time."

Although Jo Ann rarely missed her dance lessons, high school was another matter, especially when she discovered one of her favorite singers was just a subway ride away.

"I used to skip school and I would take my lunch money and gather it up for the week, catch the subway and go and see Johnnie Ray at the (Brooklyn) Paramount. I loved Johnnie Ray, who was before rock 'n' roll, but nevertheless he was the greatest."

Despite Jo Ann's music-inspired truancy, she managed to complete her junior year of high school before making the decision to chuck school altogether for a career as a professional dancer. As a member of the Johnny Conrad Dancers, she made appearances on several nationwide TV variety shows. After a few months, she formed a duet act with her dance partner, but soon found that any hopes of becoming a star on Broadway were hampered by her petite size. Whatever frustrations Jo Ann felt in regards to her dancing career, she didn't focus on them for very long. Another trip to Brooklyn Paramount theatre changed everything in regards to her chosen profession.

Since moving to New York, Jo Ann had become an even bigger fan of R&B and the new sound that top New York deejay Alan Freed called rock 'n' roll. In September 1955, Jo Ann attended Freed's 'First Anniversary Rock 'n' roll Party' at the Brooklyn Paramount. The line-up included Lillian Briggs, the Rythmettes, the Nutmegs, the Cardinals, the Four Voices, the Harp-Tones, Nappy Brown, Red Prysock, Sam 'The Man' Taylor, Al Sears and Chuck Berry in one of his first New York appearances. Seeing so many live wire rock 'n' roll acts had a life-changing effect on the 17-year-old Jo Ann Campbell. "I knew my days as a dancer were over," she told Billy Poore. "I was determined I was gonna sing rock 'n' roll and be on Alan Freed's stage one day."

Jo Ann's sudden career shift probably came as a shock to her parents, but her determination soon led to them getting on board with the change. Jo Ann's manager, Mike Glendel, also had little choice in the matter as Jo Ann pushed him to drop dancing jobs and focus on getting her a recording contract.... 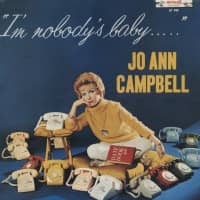 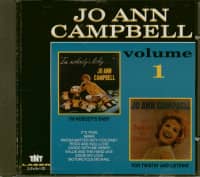