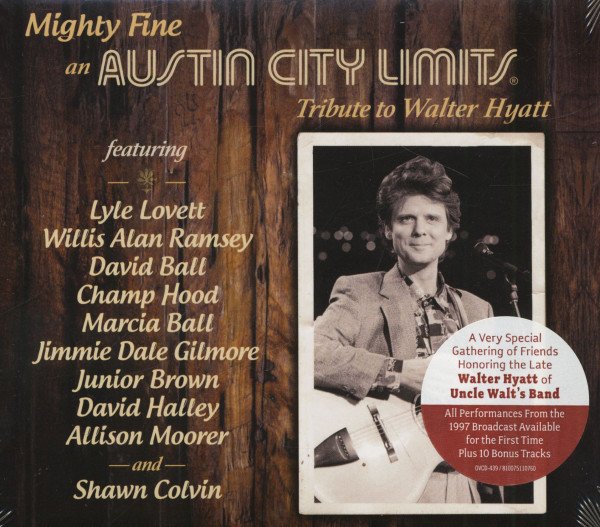 (Omnivore Recordings) 21 tracks, digipack
Uncle Walt's Band (David Ball, Champ Hood and Walter Hyatt) was one of the most popular bands in Austin, Texas, although they were originally from South Carolina.

Their excellent songwriting, playing, and singing gained them not only local fans, but also Texas luminaries such as Willis Alan Ramsey, Jimmie Dale Gilmore, and Lyle Lovett. After a few self-released albums (all available again through Omnivore Recordings), the band initially went their separate ways. In 1990, Lovett produced Hyatt's major label debut, King Tears, and toured with Walter as its opening act. Three years later, Hyatt released Music Town. Sadly, he was killed in the 1996 plane crash that killed all passengers and crew. Lovett helped organize memorial concerts to benefit Hyatt's wife and children.

Now, nearly 25 years later, the eleven songs from that original broadcast are available on CD for the first time.
In addition, there are six tracks that were recorded for Austin City Limits but not featured in the broadcast.
To make this collection even more special, four previously unreleased Hyatt recordings make their debut.
The packaging includes photos and a new essay by North Carolina author and musician Thomas Goldsmith.