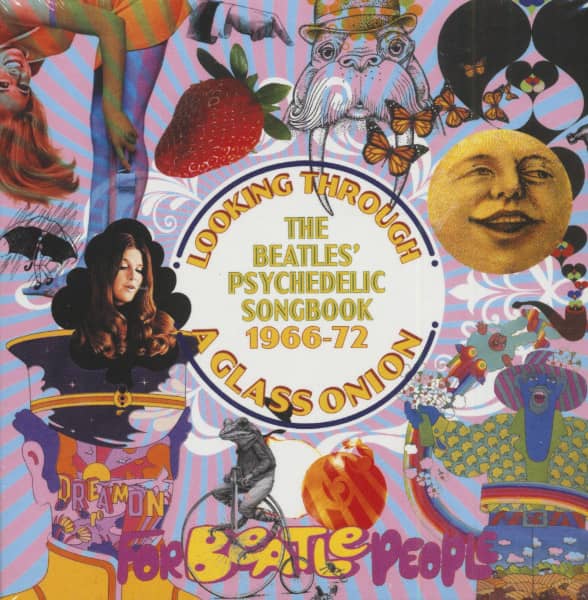 (Cherry Red) 68 tracks, papersleeves in case
Although largely forgotten today, the Beatles from Liverpool were the ultimate in the sixties, responsible for some of the best-selling singles of all time and a series of groundbreaking albums that dictated musical trends until their next LP came out.
Since these albums contained numerous potential hit singles, it was inevitable that producers and groups would wait impatiently for the latest Beatles LP, only to rush into the studio and clone a track to get a cheap hit single.

This process continued unabated for the rest of the band's career, but the results became more interesting with the arrival of the psychedelic and progressive era, as rock began to take itself more seriously and a more self-respecting artistic approach was required.

Cheap imitations were suddenly joined by more adventurous interpretations of Beatles material, including some stunning reinterpretations of songs dating back to the salad days of the writing partnership between Lennon and McCartney, with early efforts like "Every Little Thing" and "You Can't Do That" receiving radical treatments to reflect the changing musical times.

A 3-CD set entitled "Looking Through A Glass Onion" brings these different strands together into a cohesive package in which studio day-trippers, cultural pranks, genre benders, folk club stalwarts and the stuck-up prog rock brigade slowly rise to the starting line.

The result is the proverbial Magical Mystery Tour, a Fab Four parallel universe, a Looking Glass world where "Strawberry Fields Forever" can be an Elizabethan garden party madrigal or a churning piece of agitated mud, where a wacky Duffy Power might take the lyrics of "Fixing A Hole" a bit too literally, "Penny Lane" becomes avant-garde Easy Listening, Nick Lowe, Alex Harvey and Ritchie Blackmore try out early identities, and the walrus was Lol.

With nearly four hours of music and a 40-page booklet, "Looking Through A Glass Onion" contains 68 tracks by various British acts, with tons of memorabilia and rare photos, plus the usual wordy, wise commentary, shamelessly presented as an informed musical commentary.

A great time is guaranteed for everyone. Well, almost everyone.