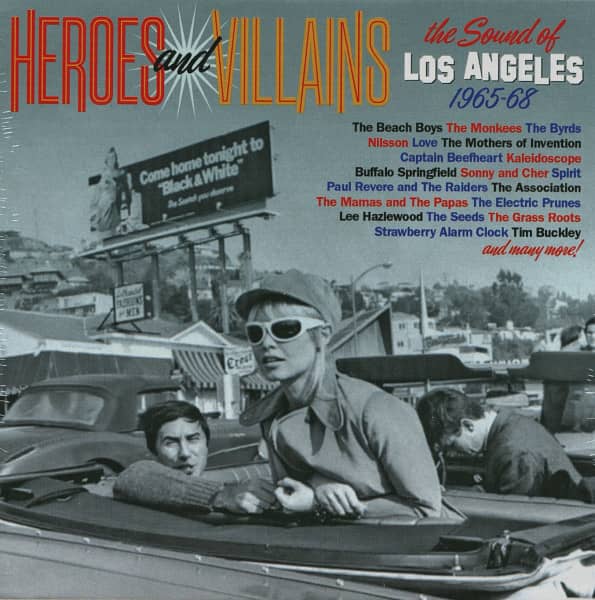 (Grapefruit Records) 90 tracks, paper sleeves in slipcover box.
A four-hour, 90-track overview of the Los Angeles music scene between 1965 and 1968

"Heroes and Villains" is a fascinating four-hour journey into the heart of the LA music gold mine of the late '60s, housed in an elegant clamshell box set with a richly illustrated and annotated (more than 20,000 words) 80-page hardcover booklet.

After the Beatles captivated an entire generation with their appearance on the Ed Sullivan Show, the Los Angeles music scene moved beyond the surf, hot rod, and girl group records that had dominated until then to provide a spirited response to the British invasion.

The Hollywood studios and teen clubs of the Sunset Strip hosted an exciting array of bands, with names like The Byrds, Sonny And Cher, and the increasingly ambitious Brian Wilson leading the way as LA established itself as America's premier music city in 1965. The scene continued to evolve to include psychedelia, sunshine pop and proto-hard rock before the horrific Tate-LaBianca murders traumatized the LA music scene in August 1969, bringing a shocking, apocalyptic end to the freewheeling '60s.

'Heroes and Villains: The Sound of LA 1965-68' traces the entire cataclysmic scene, featuring classic hits by The Monkees, Paul Revere And The Raiders, The Association and The Grass Roots, as well as key recordings by Love, The Byrds, The Beach Boys, The Mothers Of Invention, Captain Beefheart, Buffalo Springfield and The Mamas And The Papas.

Among the unreleased demos, alternate versions and first releases are a host of extremely obscure garage punk 45s - many by bands now telling their story for the first time, including The Satans (the infamous "Makin' Deals"), Somebody's Chyldren (Hollywood legend Mae West's backing band on her two 1966 albums), The Prophets of Old, The Heros and The Odds And Ends.