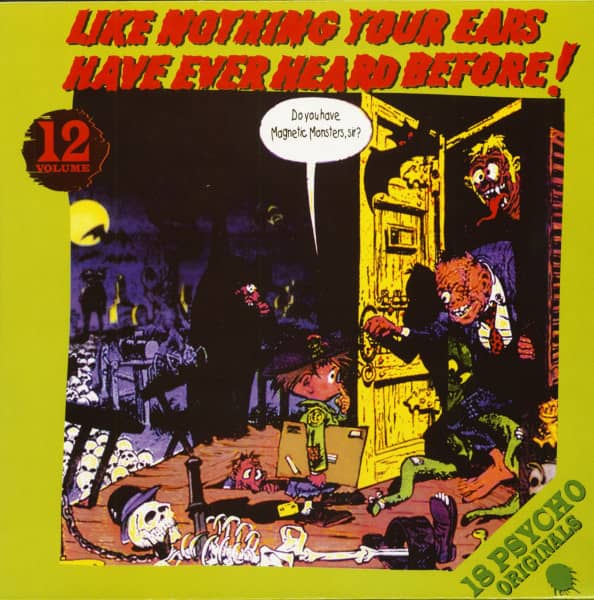 Various: Like Nothing Your Ears Have Ever Heard Before Vol.12 (LP)

WELL NOW DIG THIS by THE JODIMARS seems to be a good opener for this volume of LIKE NOTHING YOUR EARS ... When MARSHALL LYTLE (of BILL HALEY's original COMETS and ex-JODIMARS member) found his way back to the stage in 1993 than he covered his own song with his band MARSHALL LYTLE AND THE SHOOTING STARS.
I'M READY by THE COCHRAN BROTHERS is a country flavored rocker which was recorded at the Gold Star studio, in Hollywood, and is sung by Hank Cochran. This song was covered by a whole lotta bucketful of bands like ROCKIN' LORD LEE AND THE OUTLAWS.
COME ON by WYNN STEWART is a real sleazy rocker. Wynn found himself dropped from his label (CAPITOL REC.) and signed briefly with Challenge-Jackpot, where he made a gallant attempt to cash in rock'n'roll with this one which was covered by THE PLANET ROCKERS.
ARKANSAS STOMP by BOBBY LEE TRAMMELL, one of the Arkansas-born rockabillies who released many consistently fine rock'n'roll singles for a slew of West Coast and Mid-South labels. This song was covered by TAV FALCO'S PANTHER BURNS back in 1984.
LET'S TALK ABOUT GIRLS by THE CHOCOLATE WATCH BAND. There must be something unique about a band that can maintain a considerable following nearly 20 years after their demise, and without any hit records to their credit. Such a band is San Francisco's CHOCOLATE WATCH BAND. But you can find this song as a coverversion on THE CANNIBALS LP "Trash for cash from the Cannibals".
INSIDE-LOOKING OUT by THE ANIMALS was originally released on UK DECCA Records. Yes folks, what should I say about this great band ? The song which is featured here was part of THE STING-RAYS live shows.
FEELIN' LOST by THE RATIONALS was may be the inspiration for parts of "Don't break down" by THE STING-RAYS. "Feelin' lost" was a great mish-mash of styles, ranging from the Beatles to the Kinks, but it attracted only little attention.
WE SAY YEAH by CLIFF RICHARD AND THE SHADOWS was recorded for the motion picture soundtrack of "The young ones". Maybe it's Cliff's best rocker he had ever recorded. This one was part of THE POLECATS debut LP and it was covered by THE SHARKS too.
MY ONE DESIRE by RICKY NELSON was written by Dorsey Burnette and recorded in 1960 for the LIBERTY label. It became famous as part of the first STRAY CATS LP.
GERALDINE by THE OLE MISS DOWN BEATS is a very strange song with a real cool jungle mood. I don't know if this song was ever covered by any band, but it's a classic tune for psychobilly music in the 50's and 60's.
BONFIRE by JIMMY PIPER is one of those records which were played in a real mystic mood. It's got very cool lyrics and great guitar riffs. Jimmy himself is another great unknown cat who never made it like so many others. This song was covered by THE RAYMEN and THE BALLROOMERS.
THE PALE FACE INDIAN by MARVIN RAINWATER is the original version of Don Fardon's "Indian reservation" which was covered by THE RADIACS and THE LONG TALL TEXANS.
BAD MOON RISING by CREEDENCE CLEARWATER REVIVAL is a good candidate for the "most covered song in psychobilly music". This evergreen was performed by bands like THE METEORS, THE RATTLERS and by a german outfit called THE SWAMP DOGS.
CRAZY HORSES by THE OSMONDS is a real gone killer. Back in 1972 THE OSMOND brothers hit the charts all over the world with this wildie. In 1986 a band called DEMENTED ARE GO released their version of "Crazy horses".
FIRE by ARTHUR BROWN was another chartbreaker in 1972. It was covered by THE AUNTIE VEGETABLES an awesome con-glomeration of has-beens went to make up this bewildering entourage, not forgetting Arthur Brown with the rotund SEXTON MING as the Metaphorical cherry on top ...
FIRE ENGINE by THE JIVE-A-TONES which were fronted by DEAN STEVENS became famous when it was covered in the mid 80's by THE SURE SHOTS. This song could be found on a compilation CD called "The Northwood Story - Volume 1".
GUITAR ROCK by BILL FLAGG is a real great slap bass song. This song was covered by MR. C and it's only appeared on a Sonet Records compilation years ago. But nobody knows who the fuck Mr. C really was, maybe it was PETE DAVENPORT.
BAREFOOT NELLIE by THE TENESSEE CUTUPS brings our journey to the end. This hillbilly skiffle song was part of the second RATTLERS album and brought this one to the end too.

Video von Various - Like Nothing Your Ears Have Ever Heard Before Vol.12 (LP)

Article properties: Various: Like Nothing Your Ears Have Ever Heard Before Vol.12 (LP)