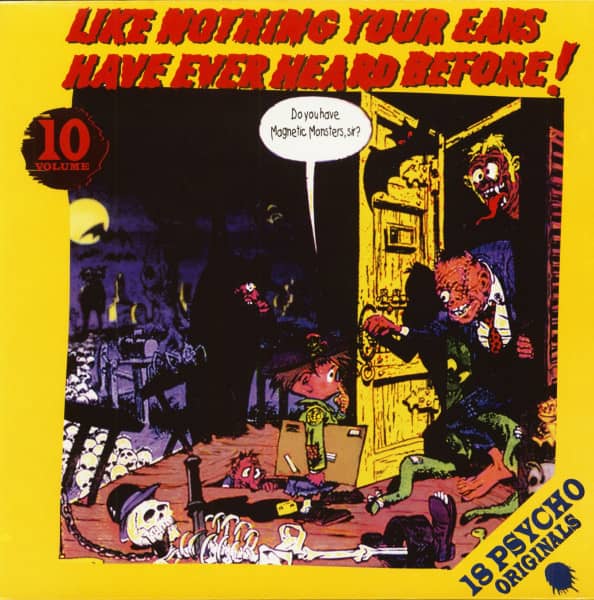 Various: Like Nothing Your Ears Have Ever Heard Before! Vol.10 (LP)

Let's blast into the past - back into the garage psychosis and the rockabilly disease of the fifties and sixties. Minus four - three - two - one -BLAST OFF by ALDEN HOLLOWAY seems to be a good opener not at all for this record but for RAY CONDO AND HIS HARDROCK GONERS on their second LP "Hot 'n' cold" back in 1988.
LET ME SLIDE by JIMMY PATTON is a real gone wildcat rocker. This thunderous rockin' tune wasn't released until Rollin' Rock did in the 70s. JIMMY is better known for his best rocker "Okie's in the pokie" which he recorded for Sims.
JELLY ROLL ROCK by WALTER BROWN & HIS ALLEY CATS was originally released as the flip-side of "Alley cat". It became part of THE CRAMPS live-shows in 1992 and can be heard on their four track CD called "Blues fix".
YOU GOT A  HARD TIME COMIN' by THE REMAINS is one of those garage punk tunes you could hear on THE STING-RAYS debut LP "Dinosaurs" back in 1983. Between the years 1964-1966 THE REMAINS were something like Boston's hard rockin' retalation to the British Invasion.
LEAVIN' HERE by THE RATIONALS was a gigantic cover of this Holland-Dozier composition. This track was sold to Cameo Records and with "Feelin' lost" on the flip it broke nationally in November 1966. This true shouter was covered by the post-VIBES band - THE BUGS.
FEEL IT by IT'S ALL MEAT dates from the late sixties. The influence of free-form rock can be heard in the lack of tight structure, yet it has a solid punk fuzztone and can be viewed as a kind of timewarp record. The song became a classic hit for Nigel Lewis' TALL BOYS.
BOP-A-DEE BOP-A-DOO by HAL WILLIS is similar to THE SPACE CADETS hit-single "Awakadeeawakadoo". They exchanged the lyrics and made a brand new song out of the very rare tune.
THE CATALINA PUSH by THE CATALINAS became part of THE PERCOLATORS (a german outfit) live shows. THE CATALINAS started their own Catalina label, cause it was the only way to get it on record. THE CATALINAS also recorded a great song called "Speechless" for the Back Beat label.
ALABAMA JAILHOUSE by ROD MORRIS was released on the California based Ludwig label. Rod is better known for several Capitol records but nevertheless a coverversion of this song became an evergreen for the godfathers of neo-rockabilly - RESTLESS.
WHIPLASH by RIKKI & THE RIKATONES was recorded for the Ohio based Manhattan label. It became a neobilly hit for THE RICARDOS who recorded at the Riverside Studios.
HI-FI BABY by TEDDY McRAE was covered in the late 70s by FAST FLOYD AND THE FAMOUS FIREBIRDS. It's a real frantic stompin' blues shouter.
JUMP BACK HONEY by HADDA BROOKS was recorded in 1952 for OKeh Records. For the first time it was covered in 1956 by GENE VINCENT AND HIS BLUE CAPS. In the late 70's and early 80's it was covered by several bands.
AM I BLUE by EDDIE COCHRAN was recorded in mid-1957, it was coupled with "Drive-In show" to make-up EDDIE's third single release for Liberty Records in the U.S. THE SURE SHOTS recorded this song for their first LP "Four to the bar" back in 1987.
LOU ANN by ARLIE MILLER was released by BOZ & THE BOZMEN on their first and last LP "Dress in deadmens' suites". BOZ exchanged the lyrics and created and brand new song called "Drag strip".
RUN RUN RUN by THE GESTURES who were one of Minneapolis' top bands in 1964 well into the late 60's. It was their most successful outing, reaching #44 in Billboard, during November, 1964. This original punk rocker was covered by Mike Spenser's CANNIBALS on their second record "Hot stuff".
BLUE GIRL by THE BAD ROADS is another punk rocker out of Texas although they recorded for the Louisiana label, Jin Records. "Blue girl" is one of those instantly addictive songs. A great fuzz lead, punky sneering vocals, and that Farfisa pumping along in the background. And it has one of those great guitar breaks in the middle. THE STING-RAYS recorded this tune in 1983.
MELVIN by THE BELLES was recorded as tribute to Melvin Bucci, lead singer of THE VANDALS. The Belles were something like a worthy companion to the PLEASURE SEEKERS in the girl punk pantheon and it was done by another girl punk band, THEE HEADCOATEES.
ROCK OLD SPUTNICK by NELSON YOUNG is one of STEVE HOOKERS top hits. Since years he played this song at his live shows and it could be heard on his first 10" record "Hell for leather".

Video von Various - Like Nothing Your Ears Have Ever Heard Before! Vol.10 (LP)

Article properties: Various: Like Nothing Your Ears Have Ever Heard Before! Vol.10 (LP)

$23.03
Customers also bought
Various: Like Nothing Your Ears Have Ever Heard Before... Art-Nr.: LPVTR6911

$23.03
Customers also viewed
Like Nothing Your Ears Have Ever Heard Before! Vol.10 (LP)