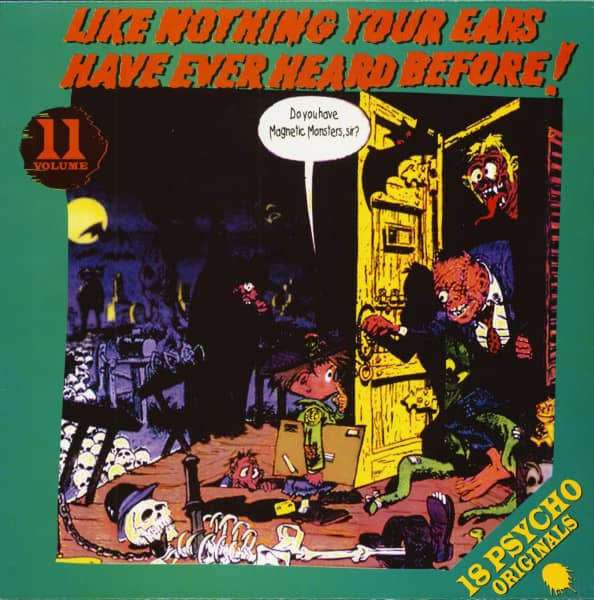 Various: Like Nothing Your Ears Have Ever Heard Before Vol.11 (LP)

DO WHAT I DO by SLIM RHODES was recorded in 1956 for SUN Records. Slim was born in 1913 at Pocohontas, Arkansas, as vocalist and guitarist, formed the group with his three brothers, Dusty, Dot and Spec., adding John Hughey and Brad Suggs. This song was released as flip to "Take and give" (SUN 256). It was covered by THE DELTAS.
HOW COME YOU DO ME by JUNIOR THOMPSON is another SUN rocker which was performed by the fabulous DELTAS. Junior Thompson from Alabama, is one of the most mysterious name in the rockabilly field. In 1955 he recorded a song on the Memphis based Meteor label which was entitled "Raw deal". He was backed by his band THE METEORS.
THAT DON'T MOVE ME by CARL PERKINS is a rough demo out-take by Mr. Blue Suede Shoes himself. It's a damn hot bopper performed by the king of the bop cats. THE BLUE RHYTHM BOYS recorded this one for NORTHWOOD records.
RAW-HIDE by LINK WRAY & HIS RAY-MEN was originally released as flip side to Link's third single for EPIC, "Slinky" (issued with an eye-catchin' color sleeve of wide-grinnin' Link). This rip-roar killer diller can be found on the CASCADE compilation "twenty great guitar instrumentals" performed by THE GEEZERS.
HATE by THE STOICS is the rarest track on this platter. It was released as flip side to "Enough of what I need", which could have been a big hit in their home town, San Antonio, but the big radio station banned it because of the line, "remember all the nights you kissed my lips and the pleasure of my fingertips". As a result of no airplay, there were no sales and no need to press more than 150 copies. Nevertheless it became part of the one and only BUGS LP "Dark side".
CAN'T SEEM TO MAKE YOU MINE by THE SEEDS was released as a single on the GNP label. It did sound somewhat anachronistic amongst 1967's experimental whirls, peaking at 41 in the charts. This tune was recorded by THE CANNIBALS and was released on the cult record "These cats ain't nothing but trash" on BIG BEAT.
THE CAT by ROD WILLIS is one of my favorite monster rock 'n'roll songs. It was released as a single track on NRC and became an evergreen in the psychobilly scene due to the coverversions by SUNNY DOMESTOZS and THE STING-RAYS.
ALL I CAN DO IS CRY by WAYNE WALKER is one of those rockabilly blasters which was recorded by a whole lotta bucketful of neobilly bands like THE NITROS.
MR. BLUES by MARVIN RAINWATER is undoubtedly his most sought-after rockabilly performance. He recorded it in 1956 for MGM Records. It became famous in the psycho scene as performed by RESTLESS.
JUMPIN' FROM SIX TO SIX by TOMMY SCOTT & HIS RAMBLERS, Tommy is known world-wide for his great musical talent in a variety of musical styles. His recordings were issued on innumerable labels. His first recordings were done in 1937 for RCA VICTOR, recorded in a mobile studio in Rock Hill. In the famous 50's Tommy went to Hollywood to perform in a western movie called "Trail of the hawk". BIG SANDY AND THE FLY RITE BOYS entitled their third long player "Jumpin' from 6 to 6".
TRAIL OF THE LONESOME PINE by STAN LAUREL & OLIVER HARDY with the fabulous AVALON BROTHERS was performed in their Hal Roach film "Way out west" back in 1937. In the mid 70's it hits the european pop charts and one decade later it became a single hit for ROCHEE & THE SARNOS.
COME BACK BIRD by ,THE CHEVELLE V is one of those Texas garage punk classics like "I'm in Pittsburg" (see & hear LIKE NOTHING ... Vol.2). "Come back bird" was something like the most wanted song on VIBES live performances. It was also covered by THE PHANTOM ROCKERS.
TILT-A-WHIRL by LEO & THE PROPHETS shows its Texas roots too. Listen to the gritty track, the rude singing, and those lyrics about bananas peeling, etc. It's easy to see why Teyas records have become such a big cult item among punk collectors. This tune was performed by a London based band called CREEPSHOW and can be found on the "Garage goodies" compilation LP.
TIME IS AFTER YOU by PEANUT BUTTER CONSPIRACY who came from Los Angeles, became part of THE STING-RAYS repertoire. It was pretty often performed live by the Rays and can be found on their live LP.
B-I-BICKEY BI, BO BO GO by GENE VINCENT & HIS BLUE CAPS is a real gone wildie which was covered by a french out-fit called THE SPRITES who recorded some tracks for NORTHWOOD Records.
PINK 'N' BLACK by SONNY FISHER is another classic rock-abilly song which seemed to be a must for every psycho/ rockabilly band in the early/mid 80's. It was covered by THE POLECATS, HONEY HUSH and the BLUE CAT TRIO.
SHE'S THE MOST by THE FIVE KEYS was covered by a five-piece from Luton called MIDNITE SHIFT. It was held down to vinyl on "The rockin' won't stop!" compilation.
BIRTH OF THE BOOGIE by BILL HALEY & HIS COMETS was recorded in January 1954 and it was released as the fourth DECCA single by Bill Haley. This driving drum beat at the beginning and the wild guitar in the middle of the track made this song to something different. In 1981 it became part of THE BLUE CATS platter "Fight back".

Video von Various - Like Nothing Your Ears Have Ever Heard Before Vol.11 (LP)

Article properties: Various: Like Nothing Your Ears Have Ever Heard Before Vol.11 (LP)