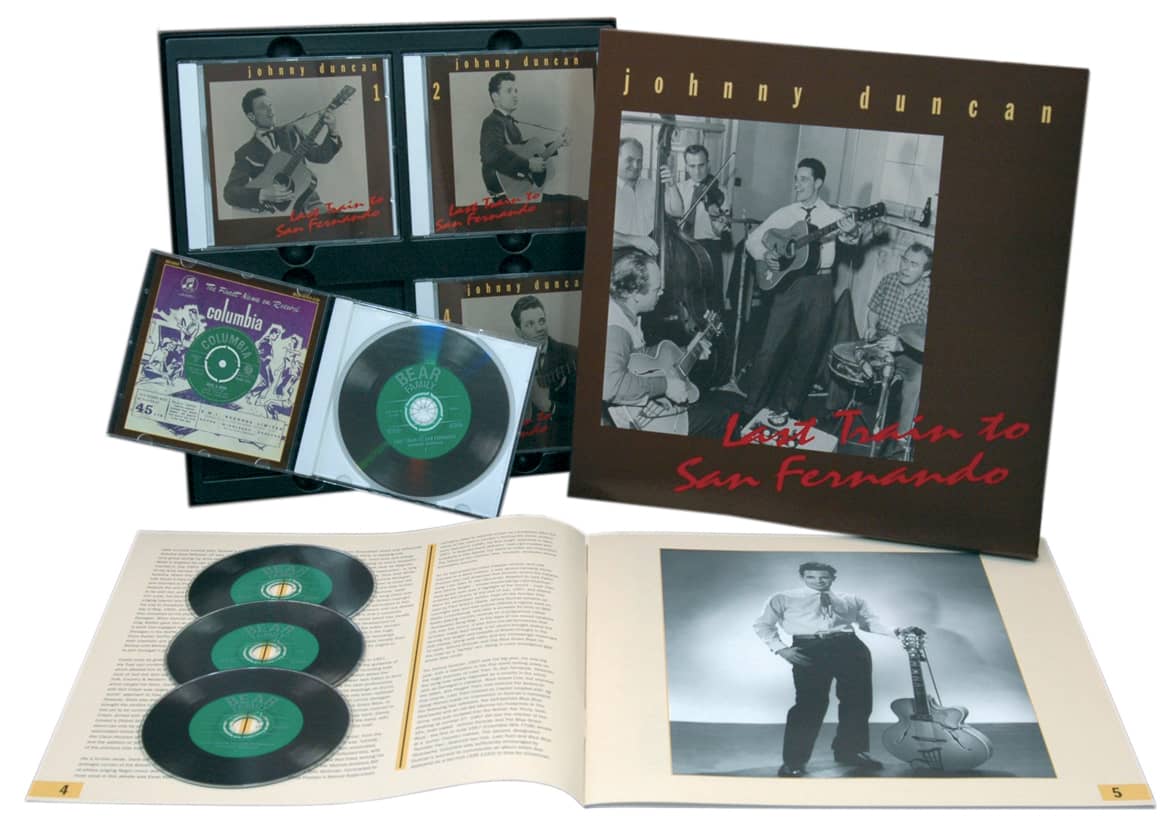 Perhaps the most surprising fact about the Calypso Craze in England is that the only authentic calypso to make a significant impact on the British record charts that year was one which few people were even likely to recognize as a calypso. Denis Preston, the influential producer behind so many of the great calypsos made for Melodisc in the 1950s,[i] unearthed a relatively obscure road march from the previous decade, countrified it, and scored a hit with it as part of England's skiffle craze, when Johnny Duncan and the Blue Grass Boys' "Last Train to San Fernando" [Track 21] went to number two in the British record charts. (Skiffle, British youth's effort to enliven their country's pop music by delving into American blues and folk, never really caught on in the States, despite its American jug-band roots.)

Duncan was from Michigan, had spent time in Texas, and claimed to have played with Bill Monroe, the father of bluegrass; he'd gone to England after failing to find success in America. At his first studio session there he recorded songs by Hank Williams and Leadbelly, but they didn't catch fire. When he returned to the studio, he chose a train song with a gentle melody—mindful, perhaps, of the biggest skiffle hit of the day, Lonnie Donnegan's cover of Leadbelly's "Rock Island Line." Paul Pelletier explains the choice:

As he had produced many Calypso records (and was married to a West Indian), it was almost certainly Denis Preston who had proposed that Duncan record the Calypso song "Last Train to San Fernando". Adapted by Jack Fallon and Denny Wright—whose breath-taking Latin-American style guitar solo was a highlight of the record—"Last Train" entered the charts at the end of July, 1957, and stayed there for seventeen weeks, kept off the Number One spot by Paul Anka's "Diana." Johnny Duncan became an overnight star and was quickly offered a regular spot on Radio Luxembourg, and later a six-week DJ stint on BBC Radio playing country records on a programme called "Tennessee Song Bag."

"Last Train to San Fernando" had begun its life as a Road March contender in 1949 or 50 for Mighty Dictator (Kenny St. Bernard). On its surface, the song's chorus seems to convey the urgency of catching the evening's final train home from Trinidad's capital, Port of Spain, to its second city, San Fernando, before service shuts down for the night. (No doubt many who heard Duncan's version figured San Fernando for some backroad town in southwest Texas rather than southwestern Trinidad.) One doesn't have to dig deep, however, to hear a classic Trini double-entendre—about "Dorothy" offering the singer a last chance at a fling ("If you miss this one/You'll never get another one") before her impending marriage ("Be careful of the place you are taking me/Because if you slip, I'll slide/And I'll never get to be a bride")—but Duncan's bouncy delivery obscures the racy subtext.

Indeed, Preston arguably bears much of the responsibility for calypso’s postwar popularity in Britain.  According to Richard Noblett, Preston, who also oversaw the production of dozens of influential jazz discs for Pye and Columbia in the U.K., had put Freddy Grant’s West Indian Calypsonians on the bill of a jazz concert he’d presented in London in 1945.  Three years later, serving as Decca’s representative in New York, he discovered the Harlem calypso scene and went home to England determined to promote the music there.

Transplanted American Johnny Duncan was a brief sensation in England with his version of a calypso song, Last Train To San Fernando – a No.2 hit in 1957. Subsequent singles and album tracks such as this made it clear that Duncan's heart lay in country music. He was a miner's son, born in Oliver Springs, Tennessee on September 7th 1932, and headed for Texas in his mid-teens where he learned guitar and performed with a hillbilly trio. Then came the draft. He arrived as a serviceman in England in 1952. A year later he married a Cambridgeshire girl, Betty. After a brief return to the US, her illness and homesickness brought them back, and he briefly worked on her father's market clothes stall. It was while performing at the American Club in Bushey Park that Duncan attracted the attention of Dickie Bishop, banjoist with Chris Barber's jazz band. Bishop invited Duncan to meet Barber - and Duncan was hired at £10 a week. He stayed with the Barber for a year, performing, recording, and broadcasting. After Last Train To San Fernando had become an all-too-distant memory, he returned to the US before settling in Sunderland, North England. He toured Australia in 1972, and subsequently emigrated to New South Wales. He died on July 15, 2000.

Skiffle was a phenomenon; Lonnie Donegan was a phenomenon. Many thought the two were the same thing, until rock 'n' roll killed off skiffle - and Lonnie became a fixture in the British music scene. Here is the complete story of Lonnie on...
$83.69 $90.48
more details
Sound sample
Johnny Duncan: Last Train...From Tennessee To Taree - The... Art-Nr.: CDROLL3045

Johnny Duncan died while this album was being prepared, but he did approve the project and spent many hours researching it with Keith Glass. Keith also wrote the booklet notes and produced four new tracks by Johnny, which would have been...
$20.31
Sound sample