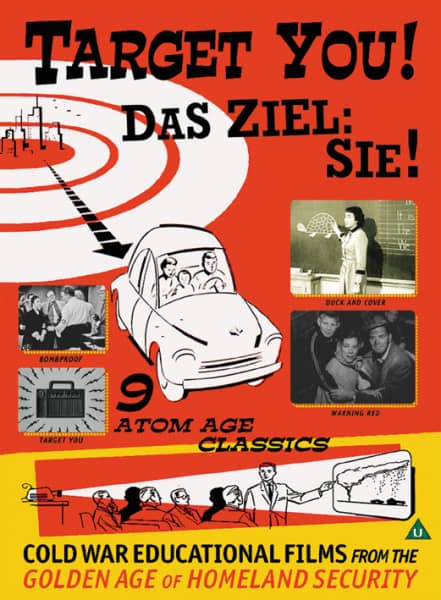 On August 6, 1945, a United States bomber dropped an atomic bomb on Hiroshima, Japan.
As we are approaching the 60th anniversary of Hiroshima Day, this DVD will be shipped in late July.
Certain parallels between those days and the present obsession with Homeland Security can be pretty scary.
"Deja vu all over again!"
New York Yankees catcher Yogi Berra
Our 'Atomic Platters' collection contains five CDs, one DVD, and a profusely annotated and illustrated hardback book. Together, the words, music, and video tell the story of early years of the atomic age... or the first golden age of Homeland Security.
The set is an invaluable cultural and historical document that deserves to be appreciated in its entirety, but with the 60th anniversary of the atomic bombings of Hiroshima and Nagasaki fast approaching, we have decided to offer the DVD as a standalone item.
'Target You!' contains nine short movies from the 1950s and 1960s. These are classic Cold War educational films. In these mad times, we're reissuing them as an eye-opener and as our contribution toward a better and more peaceful world. These films are part of contemporary history and a symbol for naivety and the helplessness in the presence of the ill-understood atomic threat. Through wide circulation of these homeland security short films and anti-communist propaganda films from the Cold War era we seek to open your eyes to today's alarming global security situation.
Watching these films from a distance of fifty years, some of the images seem bizarre if not unreal. 'Duck And Cover' (the 'Citizen Kane' of homeland security films) headlines the collection, but further highlights include 'Town Of The Times' (with Ralph Meeker) and 'What Is Communism?' (with Herbert Philbrick, the author of 'I Led Three Lives').