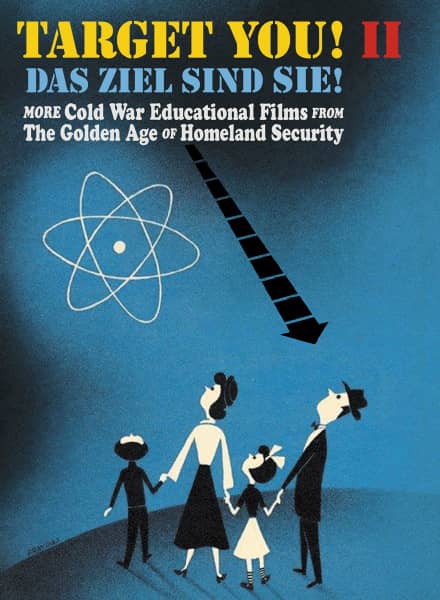 Target You II: More Cold War Educational Films From The Golden Age Of Homeland Security from Bear Family features over two hours of hilarious vintage atomic and red scare short films produced by the United States government in the 1950s and 1960s. These movies feature stars Gene Hackman, Jack Webb, Robert Conrad, Chad Everett, James Gregory and Jack Kelly in stories ranging from a Soviet invasion of America to how to survive World War III with a cynical beatnik. With 'Target You! II', you get five unforgettably ridiculous films from the atomic era:

Community Shelter Planning (1967): Watch government go-getter Donald Ross (Gene Hackman) as he tries to sell city officials on the idea of a community fallout shelter plan. This 16mm civil defense classic was released the same year that Hackman made a splash with Warren Beatty in Bonnie and Clyde.

Public Shelter Living: The Story of Shelter 104 (1964): Ever wonder what it would be like to have to live in a crowded public fallout shelter after an atomic attack? Public Shelter Living explores this scenario and throws in a surly beatnik just to make things fun. Not to be missed!

Face to Face With Communism (1951): Sergeant Conway goes on leave in a small American town and wakes up the next morning in a community under Communist domination. But there’s a twist ending!

Fighting Words (1951): James Gregory (Barney Miller, Beneath the Planet of the Apes) and his soldier pals go on leave in the big city and run into a Communist agitator in the park. An exploration of the strategic uses of propaganda ensues.

Freedom and You (1962): An expanded version of the cautionary red scare short Red Nightmare featuring Dragnet’s Jack Webb as a narrator who follows the ordeal of a once complacent American (Maverick’s Jack Kelly) rebelling against a Russian occupation of the U.S.

To top it all off, the DVD includes an illustrated booklet with extensive notes on each film by Cold War historian Bill Geerhart.