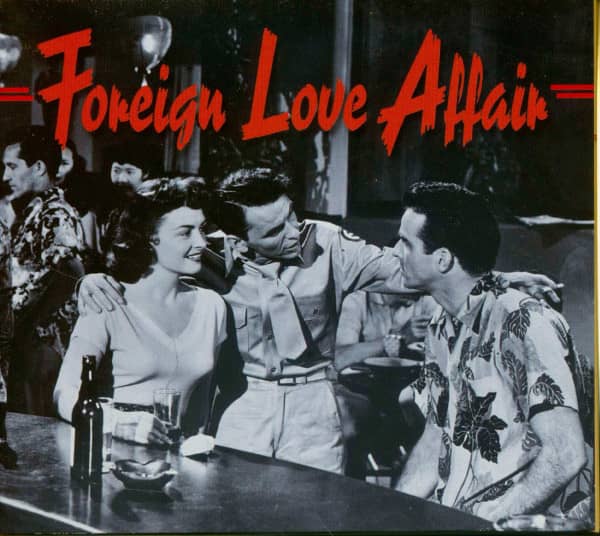 A short historical outline, a description of the life and times of post World War II in Germany from a soldier's point of view, is helpful but not necessary to understanding the songs on this particular CD. The players in this historical outline are some lonely soldiers, far away from home, and some curious young girls where these soldiers are stationed, with a desire to know more about these soldiers, here then are the main ingredients of a Foreign Love Affair.

The American Soldiers stationed in foreign lands after World War II were mostly draftees. The time was the mid 1950s through the mid 1960s. Since the end of the war, the U.S. had experienced problems with former allies and has made friends with old foes. The Berlin Blockade, the war in Korea, the Cuban Missile Crisis, the building of the Berlin Wall, the world was still a dangerous place, and the price that must be paid is a continued presence in places far away from home. The duty often seemed to be just a breath away from being another conflict greater than the last. For the soldiers stationed in these places, the normal tour of duty was two to three years, the best thing was to do your obligation, then go home to the safety of your family, your familiar surroundings, and hope that the next war would not start during your time in service.

What did the soldiers during these troubled times do? The answer of course was carry on a life as near to normal as possible, wherever you might be, do the things that normal people do in normal times. This means for young men, meet girls, dance, laugh, have fun, live for today. The call of duty did not always allow for normality as the soldier might imagine it to be. The days started early 5:00am, and were spent training on your job, doing routine details, maintenance, guard duty, kitchen police, and inspections. The young minds were mostly oriented to planning activities that would take place after duty hours. When duty hours finally ended, almost everyday at 4:00pm (1600 hours military time), the troops were dismissed from their daily routine and had personal time, to be spent, as they liked.

The young girls - some were possibly being rebellious to their parent’s warnings not become involved with a soldier – were determined to sample the forbidden fruit, while others wanted to satisfy their curiosity about Americans, or learn the truth about the things that they had heard about America. It is impossible for anyone to declare a single reason for these affairs, and because the young ladies came from all the social levels in Germany, one cannot attribute them to economic needs as may have been the case immediately following the end of the war. Whatever lay at the beginning of these relationships can only be a matter of conjecture for a casual observer, some of them led to happiness, some to heartbreak, but all of them to the memory of an affair to be remembered.

Loneliness and the lack/loss of emotions on both sides, caused by the war. Friendship, love affairs. And disappointment. In these days a special kind of songs became very popular; songs that were played in clubs, at dance-hops and by many radio stations; songs that made both, men and women, forget the workaday world. Songs like Dankeschön, Bitteschön, Wiedersehen, Lili Marleen, Fraulein, Lonely River Rhine, Happy Journey and many others have become evergreens since – on this CD they are presented for the first time as a whole, competently and carefully annotated by a man who was there some fifty years ago.

The sentiments of the GIs posted in Germany was echoed elsewhere in the world, and in songs such as Geisha Girl and My Filipino Rose (Asia), English Sweetheart and My Wild Irish Rose (Europe) or Kingston Girl (Jamaica).