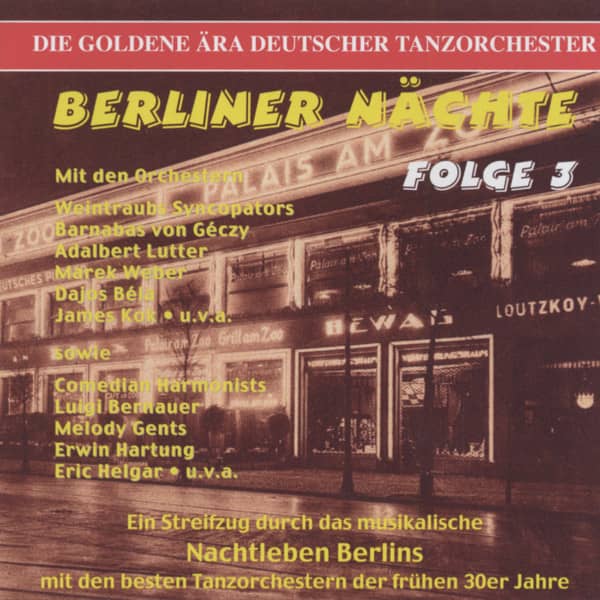 With this CD we present you now for the third time a ramble through the music world of Berlin. This time it concerns recordings from the years 1930 to 1934 with works and admissions of numerous composers and artists, who were expelled after 1933 from Germany or otherwise put down by the political guidance. Never was the German hit world as colorful and crazy as in the end-time mood of the Weimar Republic.

For this were composers such as Hans May, Otto Stransky, Nikolaus Brodszky, Walter Jurmann, Bronislaw Kaper, Leo Ascher, Text Dicher such as Fritz Rotter, Kurt Schwabach, Friedrich Schwarz and dr. Johannes Brandt, artists such as the Kapellenleiter Dajos Bga, Marek Weber, the legendary 'Weintraubs Syncopators', the violinist Edith Lorand (one of the few female protagonists of the scene at the time, who recorded far more than 1000 titles for the record between 1922 and 1933), James Kok and the performers John Hendrik, Paul O'Montis and not least the world famous Comedian Harmonists. They all shaped the Berlin music scene until 1933 with their tunes that set a dance-joyous audience in the legs and with their cheeky, ironic lyrics in a way that they should no longer be a few years later.

Many had 'luck in misfortune': Dajos IMla, a man who made his orchestra alone in Berlin between 1920 and 1933, a high four-digit number of recordings, emigrated to Argentina. Marek Weber, no less productive, landed in the USA as well as the composers Walter Jurmann, Bronislaw Kaper and the librettist Fritz Rotter. Hans May made a career in England. Less fortunate had artists like Friedrich Schwarz, who came in the fall of 1933 in never quite clear circumstances on the run in a cheap Parisian hotel room to death.

The popular chansonnier and cabaret artist Paul O'Montis, not only a brilliant performer but also an icon of the homosexual scene of the 1920s, took his own life in the Sachsenhausen concentration camp in 1940 ...
google translation