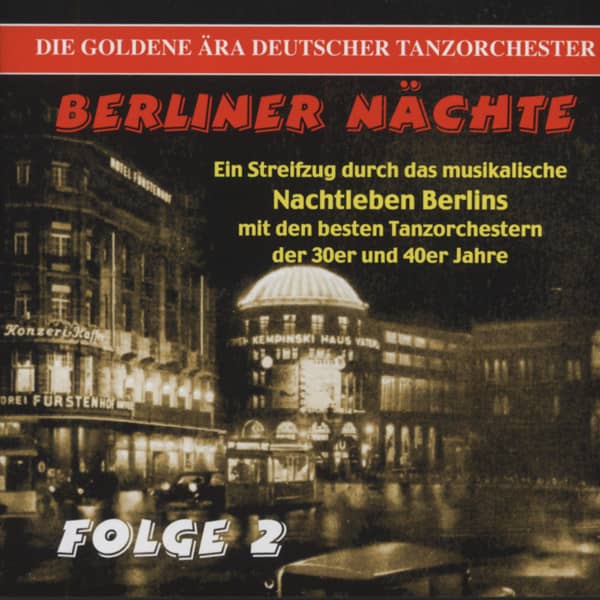 A journey through the musical nightlife of Berlin with the best dance orchestras of the 30s and 40s.

'Into pleasure!'
Berlin, the vibrant cauldron, a city full of life and bustle, a city that has something for everyone today as it was then, when the 24 tracks on this CD were pressed onto fragile shellac records. It is because of the great interest already the 2nd episode of the 'Berlin nights'.

In his biography 'Comics, jazz and crazy times' From the life of an unadjusted Berliner (Triga Verlag Gelnhausen, 2000) writes the jazz and swing researcher Horst H. Lange:
'There were so many dance orchestras of all kinds in Berlin at that time that one had to be on the road every day to hear even a few. Later, I learned from a musician that there were eight hundred (dance) musicians around the Gedächtniskirche or around the zoo and the Kurfürstendamm district alone, who were constantly making music somewhere and were also consulted on the many recordings of the record companies in Berlin. '

In the years when the recordings on this record came into being, the entertainment industry in Germany is running at full speed. Every month, dozens of new hits are released. The way to record recording creates only a fraction of it. Even greater is the number of compositions, which initially appear only in printed music, are tested on the spot in the dance and entertainment palaces on effectiveness, and then finally only 'by favor' to be recorded in the recording studio. A hit that has made it to this point is a business success. As a rule, other bands then move on and, within a short time, between four and six different versions of a title circulate on the fragile black discs. The 'way of life of a hit song' is short and intense.

A scene in the German film musical 'It illuminate the stars' has symbolized it comprehensively: a line of refrain sitting on the point, a sparkling melody that flies around, flying out into the world, then finally disappearing into the backyards of the big city, and yet, many tunes have reached Evergreen status.
As in episode 1 of our edition, this CD also presents well-known and popular music from the 30s and 40s, played by orchestras that were active in Berlin at the time. The choice of recordings depends on the musical quality.

Not all chapels we have selected have appeared publicly. Orchestras such as Hans Carste, Ludwig Rüth, Adalbert Lutter or Eric Harden are pure studio formations, but they are made of the best German and international dance musicians ...