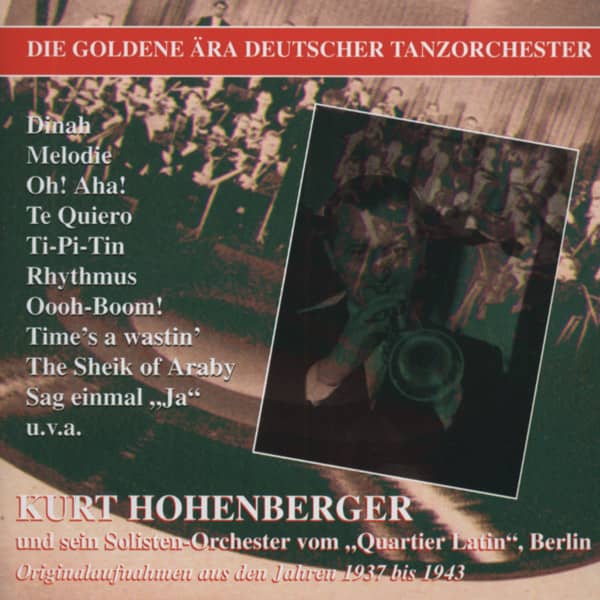 Kurt Hohenberger and his soloist orchestra from the 'Quartier Latin', Berlin
Original recordings 1937 to 1943

Hardly a bandleader has such a varied career as the trumpeter Kurt Hohenberger, born on April 28, 1908 in Stuttgart. Since the early 1930s, his instrument has been heard in numerous popular dance bands, including the Marek Weber Orchestra, the DajosBaaOrchester and George Nettelmann. From 1933 Kurt Hohenberger played in the orchestra Oscar Joost, and in this year he developed into one of the leading jazz trumpeters in the German Reich. At the inauguration of the Olympic Games in Berlin in 1936, he was honored to blow the Olympic fanfare with his brother Carl and Karl Kutzer and Erich Puchert.
In 1937 it was finally so far. Kurt Hohenberger founded his own band and performed in the elegant 'Quartier Latin'. Here he developed a very individual style, especially in numerous
Swing and jazz numbers were outstanding. Rather restrained in the interpretation as loud 'trumpeting' the HohenbergerBand quickly acquired numerous fans who particularly appreciated American hot numbers. Some of these titles, which especially in the early years for good sales in the record stores provided, are united on this CD. They are proof that jazz and swing were quite playable even during the Nazi era. Some titles like 'Dinah', 'You're driving me crazy' or 'The Sheik of Araby' belong to the classics of jazz and swing literature. Connoisseurs of the Berlin swing scene described Hohenberger's music as 'swinging, but well danceable' (Horst H. Lange). The cast of the band shows their class. Hohenberger played with a permanent staff, which belonged to the creme de la creme of German dance music: Ernst Höllerhagen (cl, as, v), Fritz SchulzRichel (P, cel), Hans Korseck (g), Rudi Wegener (b), Hans Klagemann ( d) and Helmuth Friedrich (ts, cl). At later recording sessions musicians like Detlev Lais (ts and voc), Willi Kettel (d), Serge Matull (g) or Franz Thon (cl) were added. (According to Lange: 'The German' 78 'Discography of Jazz and Hot Dance Music, 19031958) ...