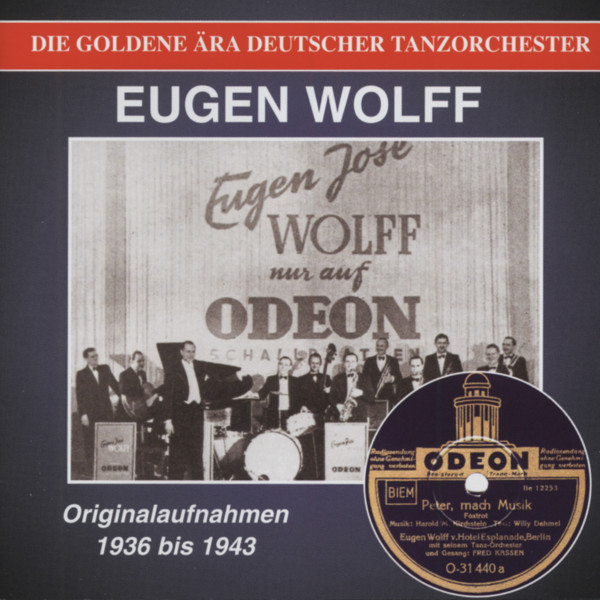 In a time that moves at a tremendous speed, in which so-called superstars are literally flushed to the surface in a monthly rhythm and quickly disappear into the foul of insignificance again, in a time when the value concept of permanence is almost meaningless because, no longer realizable, has to speak of a 'fixed size in the music business' sounds almost anachronistic.

But just about a 'fixed size' was about 15 years ago from Hamm in Westphalia coming violinist and orchestra leader Eugen Josef Wolff, who was at the beginning of his career still southern seemingly 'Josd' Wolff call, until the Nazis this so-called Stealth names (meaning: pseudonym) are forbidden.
Born on February 19, 1901, he received a comprehensive musical education as a child.

At the age of eleven, as a so-called child prodigy, he performed for the first time with his violin, and by the middle of his twenties he is already head of his own orchestra. As usual, his career takes him across the province until he finally arrives in Berlin at the beginning of the 1930s. The orchestra of 'Josd' Wolff convinces with its precise playing, the elegance of the orchestra leader and the repertoire, which is always based on the current contemporary taste. Argentine tangos or concert pieces sound in the Inter
pretation of this orchestra as convincing as Anglo-American Swing titles. In 1935, Wolff and his orchestra succeed to the popular Oskar Joost at the Berlin Eden Hotel, which was soon to prove to be a good choice. The record labels of his recordings, which appear in the same year, point out with meticulous precision: 'Josd Wolff with his orchestra from the EdenHotel, Berlin' stands with golden letters on the dark blue labels of the company 'Odeon', in which the orchestra is under exclusive contract , And when Wolff changes from the 'Eden' two years later to the no less distinguished hotel 'Esplanade', this too is exploited commercially.

Eugen Wolff is next to Oskar Joost Lund Joe Bund one of the last great band master conductors of the 20th century. His recordings, produced by the internationally operating Lindström group very carefully and with sometimes amazing sound dynamics, present a precise playing sound body, a big band of about 16 men. Rhythmically compact, of an astonishing precision in the interplay, in the first years in the bass still supported by the obligatory sousaphone, the orchestra produces a distinctive sound, which one could definitely call 'noble'. In the repertoire are next to the current musical daily clothing international hits like the legendary ...
google translation