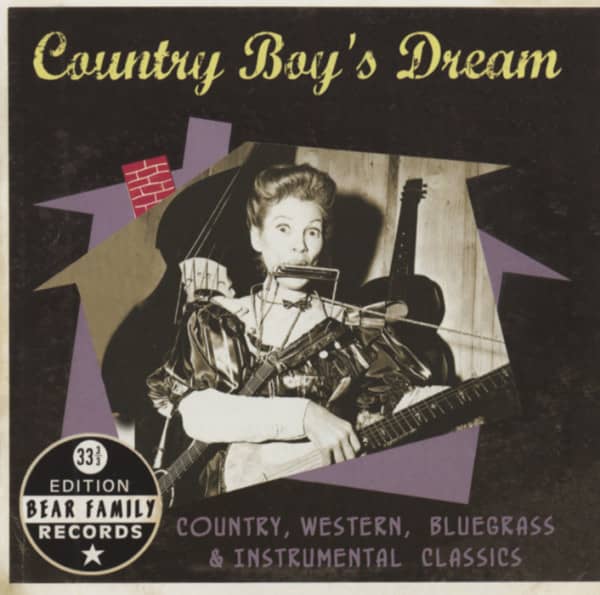 P Secure bonuspoints now
Description Review 0
Description
Bear Family is not a 'greatest hits' label, and we're proud of it… even if our accountants... more
Close menu

Bear Family is not a 'greatest hits' label, and we're proud of it… even if our accountants aren't. Throughout our thirty three years, we've gone out of our way to reissue the finest music in the highest possible quality packages, regardless of commerce. Some of the music is admittedly a little obscure, and fans are understandably wary of buying something they don't know. Hence Bear Family's 33 1/3 promotion. To celebrate our 33rd birthday, we've assembled three 33-song CDs at a special price, which will be released during 2008.
33 1/3 Juke Joint Boogie – Country & Rockabilly Classics
33 2/3 Snatch And Grab It - R&B Classics
33 3/3 Country, Bluegrass and Instrumental Classics
All of these recordings are just from Bear Family's catalog of R&B related music. Some of these songs aren't very familiar; in fact, some of the artists aren't very familiar, but this is a jumpin' little record. For every well-known song, like Carl Perkins Country Boy's Dream, there's half-a-dozen gloriously obscure tracks, like Indian Momma by Marvin Rainwater. This is a true alternative history of country. Thirty-three flashes from the archives of oblivion, courtesy of Bear Family!
Bear Family is a different kind of record company. Sure, fans can buy CDs on out-of-copyright labels for next to nothing or download songs for a few cents, but that's not why they became fans. They want to know about the artists, see rare and unpublished photos, want the very best sound quality, and want to go beyond the greatest hits. Bear Family caters to the fan in all of us!