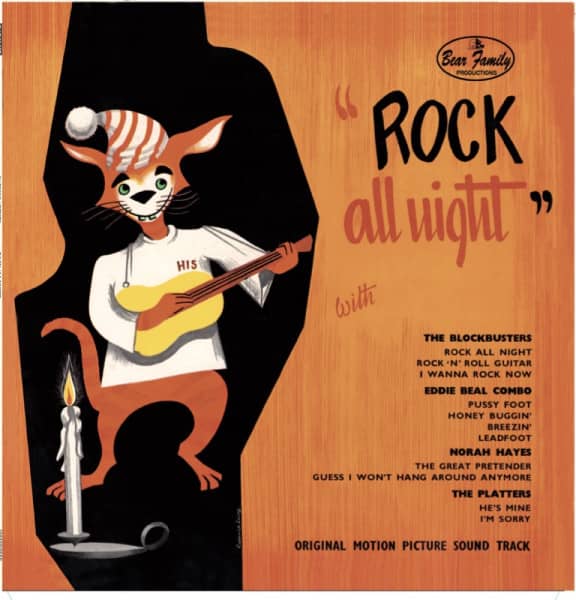 BEAR FAMILY Vinyl Club Exclusive - limited collector's edition, only directly from the Bear Family Shop
10inch LP, limited edition, red vinyl - 12 tracks.
• Re-release of the rare British Mercury 10inch LP from 1957.
• Reproduction of the hard to find original cover.
• Soundtrack of the Rock 'n' Roll movie 'Rock All Night'.
• The stylistic bandwidth ranges from Rhythm & Blues, Doo-Wop and Jazz to Rockabilly and Rock & Roll.
• Carefully remastered for this LP re-release.
• Pressed on high-quality vinyl.
• Limited edition of 500 copies in colored vinyl with 'Rock All Night' movie poster!
The soundtrack to the 1957 movie 'Rock All Night' was released in the USA on LP and only in Great Britain on a 10inch LP! We are now relaunching the British version in our 'Vinyl Club Exclusives' series.
Originally released in the UK with a different cover than the US edition.
The director of 'Rock All Night' is Roger Corman, who directed other Rock & Roll films including 'Carnival Rock' and 'Teenage Doll' and produced an endless series of B-movies.
The extremely successful songwriter and producer Samuel 'Buck' Ram, who had already helped the Platters to success and fame, is responsible for the music of the soundtrack, a balanced mixture of Rhythm & Blues (Linda Hayes), Doo-Wop (The Platters), Jazz (Eddie Beal Combo) and Rock & Roll and Rockabilly (The Blockbusters)!

What a nice idea to re-release this rare item! IF you find the original it it is VERY EXPENSIVE and I think for most of us unaffordable! THANK YOU Bear Family - this is the best compromise I can imagine and I already spin it on turntable!