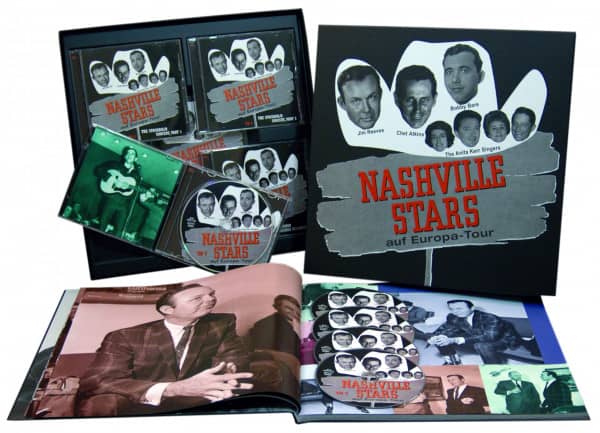 RCA's top brass in New York rolled out the red carpet for a troupe arriving from Tennessee. And they should have. Corporate HQ had long ago stopped laughing at its country division as first Steve Sholes and then Chet Atkins made the Nashville branch into a goldmine that delivered hit after hit year after year. Several artists on the roster, Eddy Arnold, Hank Snow, Don Gibson, Jim Reeves and Bobby Bare, delivered not just country hits...but pop hits, and not just national hits...but international hits.

Now a delegation from Nashville was to fly to Germany to introduce Europe to the Nashville Sound. lt was a time when the music world was consumed with all things British, and it was a bold move to bring American country acts to Europe. RCA, though, was desperate. The company had no acts to compete with the Beatles, and, in the spring of 1964, country music looked like RCA's best bet for beating back the British. Jim Reeves could look back on 25 Top 10 hits in the 'Billboard' country charts, and several of those had cracked the pop charts as well. He'd done almost as well overseas. Bobby Bare had gone pop with Shame On Me and Detroit City, and had just delivered his knockout punch, 500 Miles Away From Home.

Even Anita Kerr (as Anita And Th'So-And-So's) had scored a Hot 100 with Joey Baby. At 2:00 pm on April 2, 1964, RCA's corporate managers hosted a reception for the Nashville troupe at Lufthansa's VIP lounge in New York's John F. Kennedy International Airport. Jim Reeves (aged 40) was the only one to show his colours as a Texan by wearing a pair of cowboy boots. Bobby Bare (29) wore a lounge suit, while Chet Atkins (39) passed around a Stetson hat that Anita Kerr jokingly put on her bobbed hair-do. One of RCA's staff photographers snapped away, recording the event for the company's in-house magazine. They all tried to loosen the somewhat stiff atmosphere, but they would have preferred to be boarding their tour buses rather than a plane bound for Hamburg.

Face To Face With The Stars

Richard Weize”s 1964 report for the fanzine 'European Hayride' showed that fans were excited that real country music was coming to Hannover. Weize's favorite stars were Jim Reeves, Bobby Bare and Chet Atkins, and he made a 100 km trip by train from Bad Gandersheim to the capital of Lower Saxony. While Ronny sang Oh, My Darling Caroline, Weize left the hall to look for the organizer. He asked whether he could go backstage, and was told he could. The meeting with Chet Atkins was immortalized in a photo, and another photo captured a private conversation with Bobby Bare. Only Jim Reeves' legendary brusqueness was a disappointment, but Reeves made up for it when he performed. Weize was transfixed by these appearances, and didn't mind missing the last train home.

Even the critic for the local Hannover newspaper was impressed with the country stars: “The Anita Kerr Singers, Bobby Bare, Jim Reeves and Chet Atkins made a dream come true for the audience, which had been adoring them for years, by standing face to face with them. Nearly all of them were armed with guitars and behaved so modestly, that you nearly couldn't believe it. They all know how to connect show business with art." Richard Weize's eyewitness account of the Hannover show and Alfred and Gertrud Schindler's account of the concert in Essen clearly show how much more the German country fans knew compared with the press and the organizers. ln the fans' eyes, even the sidemen in Jim Reeves' Blue Boys - Leo Jackson, Dean Manuel, Henry Strzelecki and Ken Buttrey - were much more important than the members of the RIAS-Tanzorchester could ever be. In 1964, the Nashville style wasn't imitated by German musicians.

Chet Atkins' fingerpicking was only known to some insiders. And Dean Manuel's piano playing was a revelation: for the first time Old Europe heard in-person the 'slip note' piano style that Don Robertson and Floyd Cramer had invented and was still in fashion in the Nashville and Los Angeles studios. The musical program varied slightly from town to town, and from country to country. Bobby Bare, for instance, did a medley in Stockholm that parodied his fellow artists, from Johnny Cash to Elvis Presley. Chet Atkins ensured that his successes as a producer - Don Gibson's Oh Lonesome Me and I Can 't Stop Loving You, for instance - were reflected in his shows. After all, it was a promotional tour to Showcase RCA Nashville. lt was also meant as just a beginning. At Teldec in Hamburg and at RCA's Geneva headquarters, there were already plans underway to bring in more artists.

Thank you for a great product

If you have wondered how Jim Reeves sounded in concert, this is a set you need to have on your collection. The technical quality of the recordings made in Stockholm and Oslo put you right there in the audience, and oh how I wish I could have been there in person!