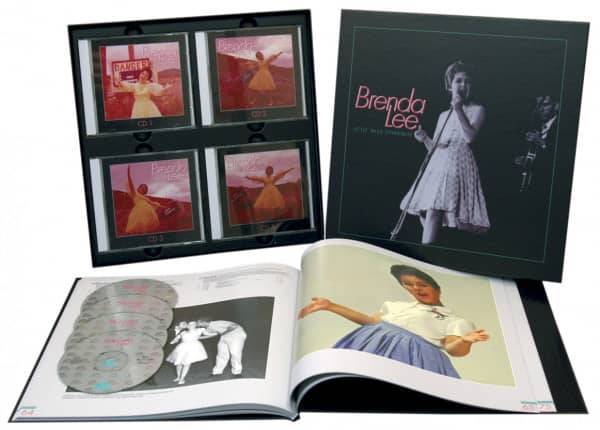 Here, complete for the first time, are all Brenda's early recordings from 1956 until 1963. These include Sweet Nothin's, I'm Sorry, Rockin' Around The Christmas Tree, I Want To Be Wanted, Emotions, Dum-Dum, and Break It To Me Gently. The early albums are complete as well. Most of these titles have been unavailable for years!
Little Miss Dynamite It Seems Like She's Been Around Forever.

"This woman came up to me and said, 'Oh, I just loved your show and it's so great seeing you again.' I said, 'Why, thank you.' She said, 'Do you remember where we saw 'too?' I said, 'Well, no.' She said, 'At the premiere of 'Gone with the Wind." Well, I couldn't dispute her. I said, 'Wasn't it a uvmderful movie? Didn't Clark Gable look great? And how terrible that Margaret Mitchell was killed crossing the street!' I dust were right along. Because if you say, 'I wasn't there,' they're gonna say, 'Well, you were, too.' You know, that uas in I939, and I wasn't born until '44."

As the above snippet from a Brenda lee interview with author Manna Nash suggests, folks tend to think that Brenda Lee was a contemporary of Shirley Temple or Judy Garland. That has something to do with the fact that, like those two great Hollywood stars, Brenda Lee began in show business as a child. And it probably has something to do with l3renda's versatility and longevity: during her forty years of recording Brenda Lee has run the gamut of pop music, tackling country, rockabilly, Depression-era !oils standards, Brill Building pop ballads, fifties R&B, even European songs in translation and in several foreign languages, handling all with energy and aplomb. Worldwide, she's sold more than 80 million records.

But Brenda Lee is no ancient Hollywood hoofer. She's a Baby Boom, and a rocker. In I963 she toured Germany with the Beatles (they opened for her). The Fab Four still had a whole revolutionary career ahead of them, but Brenda was already an established star, having spent a decade as a professional entertainer by then and having sold millions of records worldwide. Though she would go on to record many

more great pop and countr:v songs, and continues to perform to this day, she had already made her mark. No wonder she seems to belong to a different generation. Even then she seemed sophisticated and grown-up compared to the scruffy mop-tops. And yet when she toured with the Beatles, she was still a teenager. Yes, she was younger than John, Paul, and George.

The annals of entertainment are fairly littered with the stories of child stars who weren't able to sustain their youthful appeal from Mickey Rooney to Menudo, ad nauseam. Brenda Lee is that rare impressive exception of a child star who didn't wear out her welcome. From the beginning she was much more than a novelty act: "a little bitty girl with a big ale voice," as Brenda describes her youthful self. From her first recordings she sang with the confidence and command of a full-grown adult, and as she matured she was able to infuse nearly everything she recorded with a passion and depth of feeling that belied her tender years. The influence of her early output still lingers, and artists as diverse as Elton John and Stevie Nicks have beers vocal about their debt to her music.

During her first ten years with Decca Records Brenda recorded some 250 masters. This set covers her first, and arguably her most exciting, years with the label, from I956 through I962, when she ranged in age from eleven to seventeen. Brenda Lee's recordings during these years fall more or less into three distinct periods: a brief flirtation with country music in I956, the rockabilly years from I957 through I958, then a pronrninced emphasis on ballads and standards from I959 through I962. That last period marked her greatest success on the pop charts: from the end of I959 to mid-I962, every Brenda Lee single released, nine of them, was a Top Ten hit. And many of those singles' B-sides broke high into the charts as well. During those years, she was the best-selling female as ',opal, mask-.

With the exception of two cuts from one early New York session, all of the classic recordings collected in this boxed set were made in Nashville under the direction of Owen Bradley, the man who recorded Patsy Cline and Loretta Lynn, among many others. In I966, on the occasion of her tenth anniversary with Decca, Bradley pronounced Brenda Lee the "biggest female voice of the past ten years." By way of explanation he added: "I feel that Brenda has done as much as any other artist to build and mold what became known as the Nashville Sound. The more successful she became, the more that known and unknown artists came here to get the same sound. We had a fantastic number of country acts here over the years, but Brenda added sensationalism to the old country drive. She proved that pop could be done in Nashville."

A must have for all Rock'n'Roller

A must have for all Rock'n'Roller - so if you Rock'n'Roller don't have this CD box in your collection, then you have no idea about R'n'R. 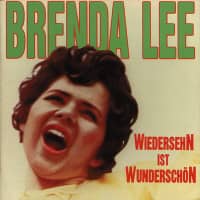 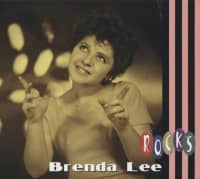 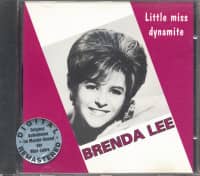 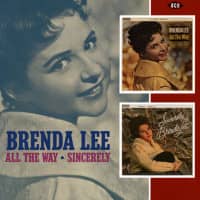