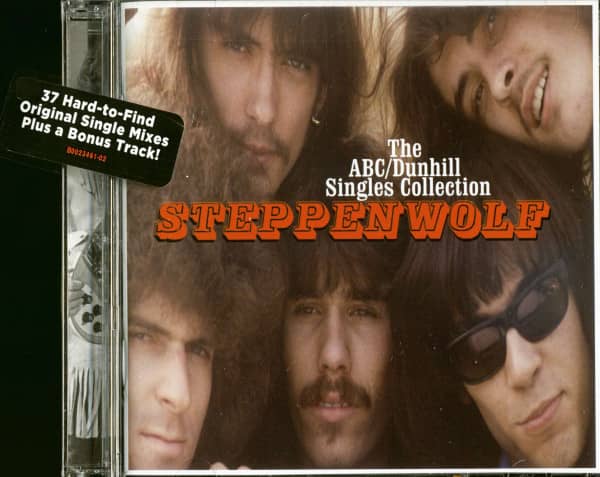 (Real Gone Music) 38 tracks, 1967-73, 24-page booklet with the story of Steppenwolf, written by John Kay, including rare pictures and extensive info on the recordings and chart notations.

The CDs contain the complete singles recorded for ABC and Dunhill, plus some rarities and the singles recorded by Steppenwolf's frontman, German-born Joachim Fritz Krauledat, better known as John Kay. In addition, there are some adaptations of country song classics, such as Hank Williams' 'You Win Again', Hoyt Axton's 'The Pusher' and Hank Snow's 'I'm Movin' On'. Producers were Gabriel Mekler and Richard 'Dickie' Podolor.

Spawned from the Canadian band The Sparrow (featuring Dennis Edmonton aka Mars Bonfire) and fronted by John Kay, Steppenwolf scored within nine months of each other in 1968-1969 with Born to Be Wild, Magic Carpet Ride and Rock Me, and charted eleven more times by the mid-70s. Often labelled as a biker band - largely due to their prominent presence on the soundtrack to Easy Rider - Steppenwolf were in fact a socially conscious, highly political band, never more so than on their controversial LP Monster, one of 14 charting albums the band released over a 20-year period.

This ability to achieve commercial success on both the single and album fronts makes them a very rare category in the annals of rock'n'roll; and it's no surprise that their albums are well represented in the CD reissue era. However, their singles were largely unavailable on CD in their original 45 mixes, as the tapes for the singles have long been lost. After a worldwide search, recording engineer Aaron Kannowski has gathered the best available sources and put together a 2-CD set that includes not only the A and B sides of every Steppenwolf single on the ABC/Dunhill label (including, for the first time ever, a decent-sounding "Magic Carpet Ride"), but also of every John Kay solo single! With 38 tracks and photos by long-time band photographers Henry Diltz and Tom O'Neal, nee Gundelfinger, this is the ultimate Steppenwolf collection!

Steppenwolf's fifth album, 'Monster,' was harshly critical of the first year of the Nixon administration. When it was released in 1969, the band, whose name was inspired by a Herman Hesse novel, was already a major musical force with two gold albums and three Top 10 singles to its credit

The founder/leader of Steppenwolf was John Kay, who also handled the group's vocals. He was joined by Michael Monarch (guitar), Rushton Moreve (bass), Jerry Edmonton (drums) and Goldy McJohn (keyboards). Their first eponymous album included Born To Be Wild, a song that is enshrined in both the Rock and Roll and Grammy Halls of Fame, as well as Hoyt Axton's [see Disc 11] The Pusher. Both numbers were prominently featured on the 'Easy Rider' soundtrack.

'Monster's' title track depicts America as "a monster on the loose" whose leaders "don't pay it no mind." It refers to the fighting in Vietnam as "a war over there…no matter who's the winner we can't pay the cost." Draft Resister commends the men "who refuse to follow traitors to humanity," and harks back to Dylan's Masters Of War in the couplet, "Heed the threat and awesome power of the mighty Pentagon/Which is wasting precious millions on the toys of Washington."

Various incarnation of Steppenwolf continued playing and recording heavy metal music through the mid-'70s. Kay, with a new backing band, charted an album in 1987. The group now awaits a call from the Rock and Roll Hall of Fame. 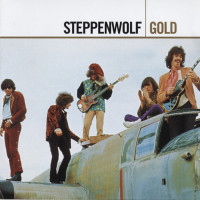 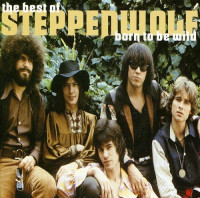